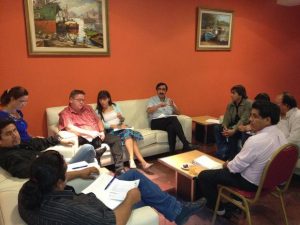 Discussions during the fisheries conference

In addition, the inaugural meeting of the ITF Fisheries Task Force took place. The task force will provide political guidance to the ITF/IUF Cooperation in their role in contributing towards the industrial priorities of the ITF, such as the ratification of C188, eliminating illegal fishing (IUU), eradicating forced and child labour and overcoming anti-union practices in transnational companies.

The FSC meeting agreed to work together and cooperate both nationally and internationally to increase union membership in the industry and drive up working conditions across the sector. It also agreed to continue to support the work of UN organisations and agencies where they meet the strategic objectives of the ITF.

The unions want to drive up safety standards and working conditions to protect workers in what can be a dangerous industry, as the case of the sinking of the Oyang 70, a foreign charter fishing vessel which sank on 18 August 2010, in which six persons drowned, shows.

A coroner’s inquest into the Oyang 70 sinking found on 8 March that systemic failure of ship management and safety practices, together with routine violations of maritime rules and seafaring practice, were responsible for leading up to the sinking. The coroner also criticized aspects of New Zealand’s ship safety management process.

Responding to these findings, MUNZ national secretary Joe Fleetwood blamed the deregulation of the fishing industry and the subsequent failure to ensure standards and processes were in place. He commented: “It is a stain on New Zealand’s conscience that these ships of shame were allowed to be operated in New Zealand waters. The deaths of the workers involved are a result of the rotten practices that have been permitted to take hold in the fishing industry.”

The sinking occurred when the master attempted to take on board an oversized net of catch, causing the vessel to take on water. With no evacuation system in place, crew members were left to fend for themselves and a worse outcome was only avoided due to the fast rescue by a New Zealand vessel in the area.

Liz Blackshaw, ITF/IUF fisheries programme leader, said: “The work of the ITF/IUF fisheries task force will be vital to in our work supporting unions worldwide drive out bad and unsafe practices in the fishing industry which put lives at risk daily. We are pleased that the meeting in Argentina made such good progress.”

A video of the opening of the fisheries section committee meeting can be viewed on ITF’s Facebook pager.

New recruits to fishing set to benefit from...

IOTICS to build a Digital Twin of Portsmouth...