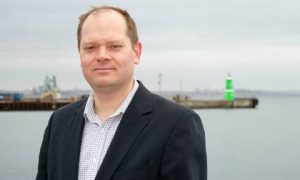 Satellite communication has paved the way for the opportunity to discover problems on ships from land. Bimco estimates that the potential is big. The new improvement provides Cobham, former Thrane & Thrane, with good cards on its hand in the future.

Once upon a time a ship had to dock, or in any case reach a secure port, in order to fix a problem no matter how big it was. If the ship was at sea, a time had to be booked at a shipyard and the engine power might have to be lowered. In the future, it is not unrealistic to avoid a lot of the trouble.

Today, a ship sailing from Asia to Amsterdam does not necessarily have to wait until reaching land before a problem may be identified and fixed. Satellite communication is opening new opportunities when problems occur on ships, says Jan Kragh Michelsen*, Sales Development Director, Global Maritime, at Cobham SATCOM, which is specialised within satellite communication e.g. at sea.

“If you have a problem with a technical system which cannot be immediately fixed by the crew onboard it is possible to enter the system in question and diagnose the error through satellite communication. Traditionally, this has not been done until the ship called at a port in order to have a specialist on board but as software is taking up much space on the ship it is possible to access different equipment and carry out services from land, ” he tells ShippingWatch.

Cobham SATCOM itself is responsible of the satellite communication equipment but the complicated surveillance systems are often controlled by e.g. engine manufacturers such as Wärtsila and MAN B&W. The advantage of the system is that it will be possible to discover the error before it occurs or as it is developing, Nicholas Anthony Mahony, Head of Front Office in Bimco, assesses. He is following the development within satellite communication.

“In case of an engine failure, the damage is assessed and later repaired. However, with these systems, it will be possible to see a problem as it is evolving, ” he says.

Furthermore, he thinks that shipping has only adopted the technology to a certain point but that there is great potential in the technology.

“The development is slow, but it is there. As a result of the relatively high price of satellite communication in general, they will not invest until they are able to see that it is possible to make money of the investment. Slowly, people are beginning to see the advantages and we will see more and more of the technology as prices drop.”

Actually, it is of great importance to be able to diagnose the error while the ship is at sea. If the error is one which cannot be fixed from land it is an advantage to know exactly which spare part is needed when the ship calls at a port.

“Today, it may often be the case that a port does not have the necessary spare part or it may be difficult to get hold of it in the short time a ship may be in the port, ” Jan Kragh Michelsen says, underlining that this situation is only natural as today’s ships operate with different systems from different suppliers – and operate all over the world.

“However, if it is possible to send the necessary spare part to the port two weeks before the arrival of the ship, the technician may board the ship and solve the problem straight away. Which is of course cost-saving for everybody – especially the shipping company, ” he says.

That way, it will be possible for the carrier to avoid having the ship waiting in the port for several days or weeks for a necessary spare part and have its trip prolonged.

Jan Kragh Michelsen underlines that diagnoses of errors has only just begunwhereas satellite communication is used on practically every carrier in the world to a varied degree.

“As satellite capacity has grown cheaper, as is our systems, we have witnessed an extended use onboard the ships and the carriers will begin to integrate them to a higher degree, ” he says.

A win-win situation for everybody, Bimco’s Nicholas Anthony Mahony thinks.

“Carriers will have more efficient operations and thereby make money of it. Suppliers make money as cheaper equipment results in an increase in the number of clients. Before, it was a niche market which is still expensive but becoming less so.”

At the moment, the satellite operator Inmarsat is working on a new system which will make it possible to transport even higher volumes of data between land and ship by 2014.

“In the future, we will see carriers investing in new products which will provide them with access to larger band width and handle an increased volume of data. Therefore, when the new service from Inmarsat will be launched, we will have to be ready with terminals adapted to the system. Which we will be. If we are not, our competitors will get the contracts, ” says Jan Kragh Michelsen, referring to the companies, Japan Radio Corporation and Korean Intellian.

*Jan Mickelsen is admitted to the Copenhagen Business School for the  Blue MBA to start his studies in September this year!

N.B. The above was first printed in the “Shipping Watch” magazine.