The Voice in My Head Is Perfect: a woman’s courage in the face of incurable MND 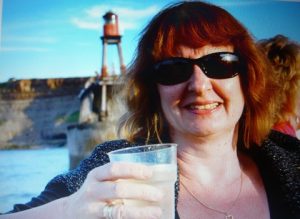 Lindy Jones on holiday in Devon

The Voice in My Head Is Perfect:  a woman’s courage in the face of incurable MND, By James Brewer

As a teenager, Lindy Jones adopted the Mary Hopkin look, with her long blonde hair parted in the middle and her hippy clothes.  In the days before straighteners, she used to iron her hair, her sister Karey recalls. Lindy sewed velvet triangles into her straight jeans to make them flared and added lampshade tassels to the bottoms to make a fringe. She went to Southgate Technical College for her A-levels and had a gap year before they were even invented.

The mix of the trendy, the ordinary and the very individual was typical of growing up in the 1970s, and Lindy Jones went on to become a successful teacher, her first post being in a tough north London school.  That experience gave her the strength to face the hardest challenge of her life – being diagnosed with motor neurone disease in 2010.

Lindy Jones has in a remarkable book, The Voice in My Head Is Perfect, bared her most private thoughts – not that she ever keeps much to herself, it seems – in frank and expletive-laden language describing how she copes with motor neurone disease and other people’s reactions. MND is the disease that erodes the nervous system, severing control over the muscles and the breathing. Even eating becomes impossible without help or being fed through a drip. The neurones that send messages to the muscles controlling functions including the way we swallow cease to transmit. The muscles atrophy, with the danger that liquid or food can miss the food pipe and go into the lungs, choking the patient.

Despite the cruel physical impact, intellect and awareness remain unimpaired.

People who develop MND might live between six months and five years, although there are exceptions – notably Professor Stephen Hawking. Lindy at first feels isolated and frustrated with the way the debilitating ailment constricts her movements and activities, but decides not to go down without a fight.  She learns from the Motor Neurone Disease Association that there are at any one time in the UK alone seven out of every 100, 000 people suffering from the disability. 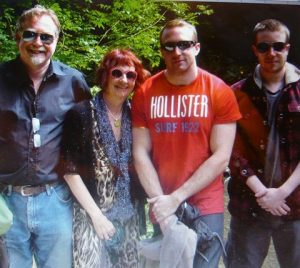 Lindy Jones with husband Gareth and sons Robbie and Owen, in July 2012

Despairing as she struggles to enunciate even the most basic words, she vows, inspired by an Amy Winehouse refrain, to say “goodbye with words, ”  enrols in a memoir writing course tutored by leading author Gillian Slovo, and learns to use a MacBook Air light-writer that can turn text into spoken word.

No-nonsense Mrs Jones gives full rein to what she calls her “inner bitch” in the densely-packed 145 pages of her autobiography.  Her sister’s recollection of their early family life is one of the more gentle passages. Suffering has not made her a glamorous, abandoned Emily Brontë heroine, but she never loses her spark. As a healthy former English teacher, endless words rolled off her tongue without her giving thought to the importance of that muscle. “I was in fact, just like you before my tongue began to betray me.”

Her 32-year career, which began with a nine year baptism of taking classes in a London comprehensive with some touchy, streetwise teenagers taught her how to command respect, and although her speech has in recent months become increasingly slurred, “the voice in my head is perfect, maybe not perfect in the way you might interpret that word, but perfect as in the way it used to be, before the neurones started to die off.” Now, buoyed by the love from her family and her faithful dog Scrappy, she tries to cram as much as possible into every day, refusing to end her book, and her life, on a morbid note.

The Voice in My Head Is Perfect is available from www.lindyjones.co.uk , from Amazon, and from bookshops. Net proceeds from sales will go to the Motor Neurone Disease Association, www.mndassociation.org