Commercial life of Mumbai firmly in the frame in stunning London show by one of India’s most talented painters, By James Brewer 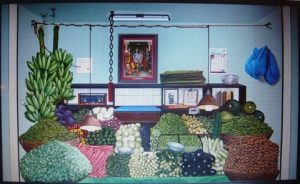 A window on Mumbai – or Bombay as the artist Tina Chandroji was brought up to call the teeming metropolis of 20 million souls – is afforded in spectacular fashion in a new exhibition of king-size canvases that she has brought to London. Amazingly, her portrayal of one of the world’s megacities includes not a single man or woman in the images, yet unquestionably conveys the buzz and vibrancy of a pulsing commercial life.

International-style shopping malls are marching into Mumbai and its far-flung suburbs, but Tina rejoices in the methodical lay-out of flower, vegetable and chicken stalls that were part of her childhood as the daughter of one of the city’s many Gujarati families.

She knows that the traditional commercial ways are related to the cultural life of India, wherever place you go, whichever shops you see. In her paintings (most measuring a goodly 120 inches by 72 inches), which each are the result of weeks and months of labour, she unlocks the doors of all kinds of enterprises to reveal them in the pristine state in which they start each early morning. Watching over the shops, at their physical centre, are images of the deity or deities: Hindu, Islam, Sufi, Zorastrain, Jain, Buddhist, Christian, and so on, different businesses run by people with different types of religion.

As we see them, there is no-one in any of the shops yet, not even a shopkeeper, pious or no.  The spaces, however large or small, are waiting to be inhabited, there is none of the hustle and bustle that is so much a part of India, and there is none of Mumbai’s ubiquitous dust. “That is just the way I wanted it, ” says Tina of the absence of people.  “If I put in human beings it might have distracted me.” The result is that the scenes are suspended between tradition and modernity. Of their pristine nature, apart from a few falling petals and leaves, the artist says: “Nobody would like to see constantly anything that is messy.  You would not like ‘entering’ a messy painting.”

This is not so strange when you think about it – most advertising and film promotion such as posters for Bollywood epics are picture perfect, everything is idealised.  This was the way, one might recall, in the medieval still life oeuvre of the Dutch artists. For Tina, it is about capturing a moment of the beauty of life, a showcase. In her home suburb, Malad, the market she remembered from her childhood has been replaced by shops.  Such older places are slowly vanishing, and she feels people should get to know what was there, but generally speaking, India retains an independent retail system of the type that has all but disappeared from much of Europe and on other continents.

Onion and potato shop, Oil on canvas, By Tina Chandroji

The show rejoices in the title India Unpacked and it has begun at the cultural  base The Bhavan Centre, West Kensington, until March 24, when it is transferring for a March 26-28 residence at the Nehru Centre, Mayfair.

The structures depicted by Tina relate to her background in film directing. “It is something like a film set for me, ” she says, referring to the three-dimensional impact she has achieved so strikingly. The rationale for painting on a large scale is so that when the viewer stands in front of the picture he or she feels as though they are entering the scene. We, the viewers, thus populate the shopscape. Amid all the produce, meanwhile, there is always an intrusion of hi-tech, be it electronic scales, or in one image, banks of unattended computer screens. 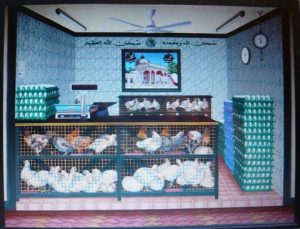 There is a big campaign at high level in India to open the retail market still further to foreign interests such as Walmart. Super-modern malls dominated by international chain stores already pepper Mumbai and other cities. Perhaps India is the one place where parallel worlds of tradition, modernity and contemporaneity will continue to go hand in hand. As previously with the older ways of selling, the malls appear to be at the pinnacle of success, but that may be the starting point for their decay.

Much of this background was elaborated and investigated in a stimulating panel conversation at the Bhavan between the curator, art historian Dr Alka Pande; Ms Chandroji; and a senior lecturer in fine art, Angus Pryor.

Dr Pande says that the legacy of Indian arts and aesthetic has long made its presence felt in the larger picture of the history of world art, be it through trade during the Mughal period or during the British Raj. “What has remained unchanged is the undying knot between the tradition and modernism.”

Unlike in the 1960s-80s, today Indian art openly ‘unpacks’ itself to the viewer. It allows us to read through the labyrinth of Indian motifs and metaphors. Pre-colonial Indian art practices and motifs are easily located in the present day art piece, contends Dr Pande. The artwork of Tina Chandroji in similar line, ‘unpacks’ the supremacy of belief in God within the Indian tradition. The coming together of religion and mercantile goods draws the viewer closer to the multiplicity of Indian art.