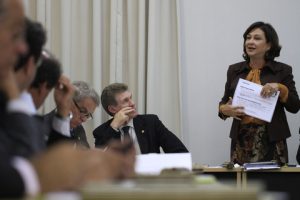 Senator Katia Adreu during a presentation at CNA HQ’s

The Brazilian Confederation of Agriculture and Livestock (CNA) believes that, unless new legislation proposed by the government is approved, the country will run the risk of a decreased ability to compete in food exports.

Brazil’s rural producers are warning of the risk of a “port blackout” and the country’s decreased ability to compete in the international market unless Congress passes a new legislation that proposes the opening of ports to private capital and the modernisation of the industry’s administration.

Despite being the second largest agribusiness exporter in the world, Brazil has invested little into the port sector in recent years, resulting in the country’s ports being highly inefficient compared to other international terminals and subsequently increased food exporting costs. Faced with this reality, the Brazilian Confederation of Agriculture and Livestock (CNA) – the organisation that represents Brazil’s rural producers – has launched the campaign Zarpa Brasil! + Competitividade (“Set Sail Brazil, More Competitiveness”), which unites other representatives from the manufacturing sectors of Brazil’s economy who support the passing of Provisional Measure 595 by Congress.

A view during a Congressional debate on the new legislation

The president of the CNA, Senator Kátia Abreu, emphasised that the country is ranked 130th in terms of port quality, according to the World Economic Forum. She says that Brazilian ports will need to double their capacity within seven years if they are to match the rate of growth in demand seen over the past decade.

Abreu believes the problem arose through a combination of errors, such as low investment in the port sector, which totals just R$ 5 billion for the last ten years. This is the same figure that is currently being paid out for the construction of three football stadiums scheduled for the 2014 World Cup, to be held in Brazil.

The senator argues that the construction of new private ports will increase competition in the port sector, including for public ports. This should lead to a fall in handling costs at the terminals, as well as increase port efficiency and operational capacity in order to meet the increase in demand for the coming years. 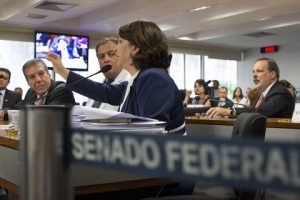 Another view during the Congressional Debate; at the forefront centre, Senator Katia Adreu

“Public ports are essential, but cargo transport will double over the next seven years, and this only reinforces the urgent need for more ports”, the senator stated, before adding: “Anyone who wants a different, more competitive Brazil is definitely in favour of the Provisional Measure and in favour of Brazil”.

Luiz Antônio Fayet, a CNA infrastructure and logistics consultant, believes that one of the port sector’s main problems is the waiting time faced by ships at port when loading or unloading cargo. The cost of berthing 100 ships for the respective waiting time – between 15 and 20 days – is practically the equivalent of that involved in building a new terminal.

According to Fayet, transport costs in Brazil, from the farm to the port, are four times higher than in the US and Argentina. That difference between Brazil and these two countries, if passed on to rural producers based at the new borders, would mean an additional income of R$ 6-8 (approximately US$ 3-4) per sack of soybeans or corn.

Brazil’s agribusiness accounts for 20.2% of the GDP, 37% of the country’s jobs and 37% of its exports. Brazil is the world’s largest exporter of sugar, coffee, orange juice, soybeans and poultry.

The CNA – Brazilian Confederation of Agriculture and Livestock – comprises the rural union system together with 27 state federations and 2, 142 municipal unions. Headquartered in Brasília, Brazil’s capital city, it is the national forum for discussions regarding the country’s agricultural production, always acting to defend the socio-economic rights and interests of those who live and work in rural areas.

Kátia Abreu, the CNA President since 2008, is a cattle breeder, forester and a Tocantins State Senator. In 2011, she was re-elected as the president of the Tocantins State Federation of Agriculture and Livestock, a post she previously held for four consecutive mandates, from 1995 to 2005.