The Pallada sets sail into Durban

DURBAN, South Africa– Maritime experts from Russia and South Africa on Saturday pledged to strengthen their ties, during the welcome ceremony of Russian training vessel, STS Pallada by the South African Maritime Safety Authority on the eve of the international BRICS engagement.

The red carpet was laid out in the Durban Harbour for the Russian ambassador to South Africa, Mikhail Ivanovich Petrakov, as well as about a hundred cadets and crew members from the STS Pallada, which belongs to the Far Eastern State Technical Fisheries University. Their visit forms part of the BRICS summit which starts in Durban next week.

SAMSA CEO, Tsietsi Mokhele, said the relationship with Russia existed as far back as the 1980’s when it supported and hosted South Africa’s political exiles and provided maritime training for South Africans, like himself. “Over the next couple of days we want to engage with you on how to strengthen that partnership, ” he said.

Thanking the Russians for their support during apartheid, Mokhele said he hoped the visit of the STS Pallada would result in an exchange programme where South African and Russian cadets could be trained in each other’s country. He said Russia had developed its maritime industry to build a strong economy. Africa, which had 31 000kms of coastline, was a rising star in economic terms but would require many maritime experts. 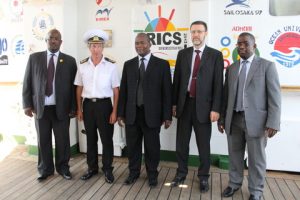 The rector of the of the Far Eastern State Technical Fisheries University, Dr Kim Georgii, said they would be happy to invite South African cadets to Russia. Thanking SAMSA for the warm welcome, Kim said the two countries had a “great mutual future together”.

Delivering an address on behalf of TransportMinister Dikobe Ben Martins, the department’s deputy director-general Mawethu Vilanasaid SAMSA was investigating the sustainabilityof incorporating a tall ship in its seafarer training programme because cadets trained on vessels where operations are 100% manual“have a better appreciation of stability, navigation and general vessel handling and design of vessels for efficiently harnessing of available energy and responses”.

Vilana said the Pallada’s presence gave South Africa an opportunity to observe the operations of a training tall ship while forging close relations with its Russian partners in BRICS. He also commended the Russians for its training initiative which was focused on the fishing industry. “It is an initiative that we have been grappling with for a long time and we consider that the Russian model holds some key lessons for our country, ” said Vilana.

He said this was vital as South Africa’s fishing and aquaculture industry made about R80 billion in turnover annually and contributed 0.5% to the South African GDP. Vilana said the value of the national catch across 22 commercial fishing industries was estimated to be between R5 billion and R6 billion annually. In addition 31 500 people were directly employed in the industry which also created a further 81 000 indirect jobs.

Durban mayor, James Nxumalo, said the visit was significant as this was the first time that a BRICS summit was being hosted in Africa. In addition Durban wanted to promote sister city trade and country to country trade and engagement to develop the local economy. Nxumalo received a letter of support from the mayor of Vladivostok where the University is based.

NB : The maritime partnership between South Africa and its BRICS partners will be further explored and cemented during the BRICS MARITIME TRADE FORUM at the Hilton Hotel in Durban, at 13h00 tomorrow (Sunday). All media are invited. There will further be a South African/Russian Cultural event on board the Pallada and SAMSA’s Agulhas in Durban on Monday, March 25, 2013.

Too much mumble business: new book Communication for International Business shows how to profit from upping your English