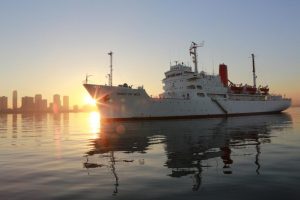 The “Spirit of MOL”

TOKYO—Mitsui  O.S.K. Lines, Ltd. (MOL; President: Koichi Muto) today announced that the  training ship Spirit of MOL has  recently completed its final training voyage. Since its first training voyage in  2007, more than 2, 200 cadets from such countries as India, the Philippines, and Russia have been  trained aboard the ship. It also made important contributions to society through  activities such as relief efforts after typhoon disasters, and received an award  from House of Representatives of the Philippines, Lloyd’s List Safety at  Sea International Awards 2008, and others.

On March  23, Spirit of MOL was decommissioned by MOL Chairman Akimitsu Ashida at the Port of Manila, witnessed by Senior  Managing Executive Officer Captain Soichi Hiratsuka, officers, crew, both past  and present, and cadets. Eight bells, which mark completion of the last watch  duty, were struck, and at the end of decommissioning ceremony, the company flag  flown on the mast was lowered and returned Chairman Ashida.

Earlier,   MOL launched a new training program called Cadet Actual Deployment for Education  with Tutorial (CADET Training), which takes over the spirit and know-how  developed during the six years of training done on the Spirit of MOL.

The new program provides training opportunities aboard vessels that  are actually in service and allows cadets, guided by specialist instructors, to  acquire basic safety education and gain a thorough understanding of the  company’s guiding principles of safe operation.