ITF in solidarity with COPE members at Toronto Island Airport 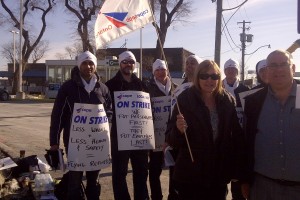 The ITF has written to the Canadian Office and Professional Employees Union (COPE) to express solidarity for its members who fuel Porter Airlines aircraft at Toronto Island Airport, who have been on strike since 10 January over alleged poor treatment by the company.

It also sent a message to Porter through COPE’s ‘Labour Start’ campaign website, warning the company of the potential damage to its business and reputation and urging it to resume bargaining in good faith with the union and to settle quickly.

In the letter to COPE Ingo Marowsky, ITF global head – supply chain and logistics, wrote: “COPE members working at Porter not only fuel aircraft but they ‘farm’  fuel for the facility as well. This means they collect fuel from the provider and store and transport fuel in large tanker to aircraft as needed. This job needs highly skilled staff, as a mishap involving fuel could result in dire consequences for the workers and Porter’s passengers, as well as the public.

“We are greatly concerned that Porter Airlines, which is expanding its operations throughout eastern North America, is reportedly trying to interfere with the right of newly-organized workers to be in a union. Further reports say that an unacceptable final offer has been put forward to the workers that pushed them out on strike; and that Porter has not moved on its position of a 25 cents per hour increase for 11 of its 22 employees, while the others would get no increase at all. We take note that replacement workers are now being hired, for which the striking workers expressed deep concerns as the ‘new’ workers might not have the skills necessary to ensure the safety of the flying public. This is because training for new employees generally takes one month to obtain all the certification required to do this kind of job.”

He concluded: “I would like to also invite you to keep us informed about your progress – your fight for trade union rights and decent work is every worker’s fight.”