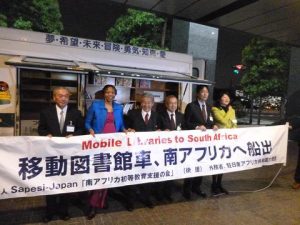 in front of the mobile library vehicle

TOKYO—Mitsui O.S.K. Lines, Ltd. (MOL; President: Koichi Muto) today announced plans to assist the non-profit organization South Africa Primary Education Support Initiative (Sapesi-Japan, *1) with the ocean transport of mobile library vehicles to the Republic of South Africa. Such assistance was provided in 2009 and 2010, so the current project is the third for MOL.

MOL previously transported 24 vehicles, and in this phase, it will transport eight vehicles. Four of them are being transported by MOL’s cutting-edge hybrid car carrier, the Emerald Ace (*2), which departed Japan on April 8.

On April 16, a ceremony for the departure of eight mobile library vehicles—donated from all over Japan—was held at the South African Embassy in Tokyo, with participants including the Ambassador of the South Africa in Japan Her Excellency Mohau Pheko, Ministry of Foreign Affairs the Ambassador Extraordinary and Plenipotentiary His Excellency Makoto Ito and MOL Executive Vice President Toshitaka Shishido. The mobile libraries that played an important role in local communities in Japan will soon gain new lives in visiting elementary and junior high schools in South Africa and contributing to the education of both students and teachers. 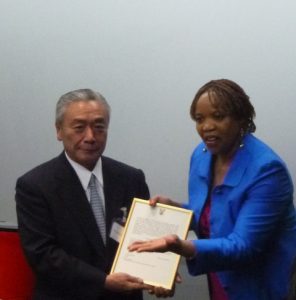 letter of appreciation from the Ambassador of South Africa

(*1) The NPO Sapesi-Japan cooperates with the South African Ministry of Education to collect retired mobile library vehicles throughout Japan and donate them to South Africa to raise the level of elementary education. In 2008, it was established as an NPO. Since then, the organization has promoted mobile library services and worked to improve school libraries.

(*2) The hybrid car carrier Emerald Ace, delivered in June 2012, represents a major step toward reducing the environmental burden of the vessels. It is equipped with a hybrid power supply system which combines lithium-ion batteries with solar power generation systems, realizing zero emissions while at berth.