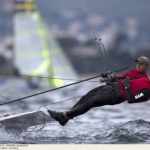 Two days of fickle breeze at ISAF Sailing World Cup Hyères brought the Qualification Series to a close as the world’s best sailors positioned themselves at the top ahead of three days of Final Series racing.

In a breeze that stabilised later on in the day, peaking at 10 knots, Ivan Pastor (ESP) and Charline Picon (FRA) were the star performers in the Men’s and Women’s RS:X on the second day of racing in Hyères to take a clean score through to the Final Series.

Pastor has been a man on fire recently epitomised by back-to-back ISAF Sailing World Cup victories in Miami and Palma which moved him to World #1 in the Men’s RS:X World Rankings. He was at his best again in Hyères winning both of the day’s Men’s RS:X races to take the overall lead and was pleased with the way things went, “I didn’t have good starts but I chose the right side of the course, ” the Spaniard said. “I had good speed and good pumping to win both races. It was great for me. It was a difficult day for the RS:X with a lot of pumping and shifty winds but it was okay for me.”

The Spaniard finishes the qualifying series ahead of Julien Bontemps (FRA) and Piotr Myszka (POL) to carry forward a clean slate into the start of Wednesday’s Final Series and Pastor isn’t getting carried away with his performance on the second day, “I want to compete day per day, it’s a long race with this system and you’ve never won anything until the end.”

Finding form in the Women’s RS:X was French sailor Picon who, after London 2012, is competing at her second event following a fifth at the RS:X Worlds in Buzios, Brazil. Using her light weight to her advantage Picon attacked the light breeze head on, “I won the first and the second race of the day and I am very happy because my coach wanted me to win in these conditions because they are good for me. It’s like the conditions in Rio and I have to be the leader in these winds.”

Things didn’t go all her way in the third race of the day as she explained, “I wasn’t happy for the last race because I made a mistake on the upwind on the first run and went down to between 25-30. It was hard to get to the head of the race and I finished tenth so not too bad. I am first after the qualifying series which is nice but tomorrow is another day and it will be windy.”

Spain’s Blanca Manchon (ESP) took the final race win of the day to move to third whilst Bryony Shaw carries forward a second place to the Final Series after a steady day of racing.

Two race wins catapulted Luke Patience and Joe Glanfield (GBR) to the top of the Men’s 470 fleet to move them nicely into the Final Series. They dislodged overnight leaders Paul Snow-Hansen and Dan Wilcox (NZL) who were still upbeat, “We had the best day we could have had, ” said Wilcox. “We struggled a little bit off the line and on the first beats but we had some good comebacks.”

Like the Brits, the Kiwis are a new partnership and Snow-Hansen is happy with consistent results top five results over the Qualifying Series that sees them advance to the finals second overall, “If we can keep up there then we’re really stoked. We’re a new combination so we haven’t sailed much together so we don’t know what our weaknesses are. We’ve got to keep getting better throughout the week and it’ll be hard to stay at the front.”

Fernanda Oliveira and Ana Barbachan (BRA) were on form once again in the Women’s 470 to pick up their third race win of the week. They advance to the final series on top followed by Lara Vadlau and Jolanta Ogar (AUT) and Tina Mrak and Veronika Macarol (SLO).

Dutch and French sailors remain at the forefront of the Nacra 17 fleet having dominated the proceedings at ISAF Sailing World Cup Palma. Elke Delnooz and Coen de Koning (NED) top the leader board followed by Franck Cammas and Sophie de Turckheim (FRA) who are making their inaugural appearance in the class. ISAF Sailing World Cup Palma runners-up Renee Groeneveld and Karel Begemann (NED) are third.

In the Laser Radial Finland’s Tuula Tenkanen was a model of consistency and across three races recorded a first, second and third. Her standout performance pushed her to the top of the Radial leader board ahead of Mathilde de Kerangat (FRA) and Marit Bouwmeester (NED).

Taking the victories in the Finn on the second day was Oliver Tweddell (AUS), Vasilij Zbogar (SLO) and Andrew Mills (GBR). The Slovenian was the most consistent sailor in the fleet adding a sixth and a third to his tally to move up to top spot. Mills and Tweddell were less impressive than Zbogar but sit seventh and eighth respectively. Rounding off the top three ahead of the final series is Giles Scott (GBR) and Pieter-Jan Postma (NED).

Germany’s Victoria Jurczok and Anika Lorenz maintained their solid start in the 49erFX and solidified top spot after the second day of racing. Following them is Charlotte Dobson and Mary Rook (GBR) and Alex Maloney and Molly Meech (GBR).

The 49er fleet were the last off the water at 20:10. Holding the lead is Federico and Arturo Alonso (ESP) followed by Pavle Kostov and Petar Cupac (CRO) who have finished third in all six races to sit second overall. Overnight leaders Dylan Fletcher and Alain Sign (GBR) slip to third.

With the Qualification Series over, sailors now carry forward a non discardable race with their points equal to their final rank in the qualification stage. A three day final series now ensues ahead of Saturday’s Medal and Stadium Races.

Charline Picon Back To Winning Races In Hyeres

Ivan Pastor Not Getting Carried Away With Bright Start

Our video team will be in Hyères from the 25th to the 27th. Footages will be available on a server : http://media.ffvoile.fr/join.php

You can find all the details about the SWC Hyères on our website : http://swc.ffvoile.com/

Payment of hire – finally a condition of certainty