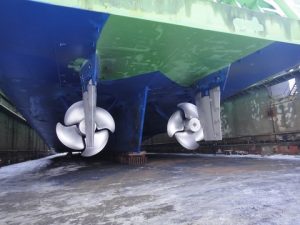 Recently several rudders were coated with Ecospeed in China and Latvia. In China the rudder of a 294-meter container vessel was treated in Shangai and a 125-meter LPG tanker had its rudder coated in Guangzhou. Around the same time Ecospeed was applied on both rudders of a 186-meter roro vessel in Riga, Latvia.

The owners decided to use Ecospeed after cavitation erosion damage had appeared on the rudders of their vessels. Ecospeed will prevent similar damage from occurring again.

The coating provides the rudder with an impenetrable protective layer. At the same time its toughness and flexibility enables absorption of the forces that are produced by cavitation. This prevents the damage normally caused by this phenomenon. Without proper protection against cavitation and the resulting erosion and corrosion damage, the financial consequences can be severe.

Tests in a flow channel were carried out in Grenoble. These have confirmed that Ecospeed performs extremely well under severe cavitation. The tests were divided into six stages. Ecospeed was exposed to an increasing pressure drop, leading to a growing cavitation force. Even after the last stage no erosion was present on the test patch coated with Ecospeed.
With an Ecospeed application no repaint will be needed during drydocking. Ecospeed is guaranteed for ten years. At most, minor touch-ups will be needed. Planning the maintenance of the vessel’s stern area therefore becomes much easier. The smoothness attained by the coating also provides optimum hydrodynamic conditions. This allows rudders to operate at maximum efficiency. The ship’s performance therefore remains stable and the owner’s investment is secured.

Thanks to the Ecospeed application, the rudders of all three vessels will be safeguarded for the remainder of their service life.