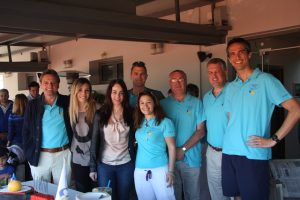 The finals were held on the evening of 25 April, allowing a few days for the finalists to rest and prepare for the final games. In the gentlemen’s finals, we watched Apostolos Kaltis (Gleamray Maritime Inc.) prevail over George Sigalas (Trade Fortune Inc.), while the ladies was won by Vera Popova of Roswell Navigation Corp. over Elpida Skoufalou representing Starbulk S.A.

In the mixed doubles, the winning couple was Ivan Pahigiannis/ Paris Panagiotidou (Stealth Maritime Corp. S.A.) as Zenon Kleopas (Starbulk S.A.) had an injury and was forced to withdraw. The gentlemen’s doubles was won by Nikos Hidiroglou and Michael Vlazakis (Parcifal Yachting S.A.) over Makis Karatzas (Minerva) and Stergios Harisiadis (Hermes/Harisiadis).

David Marock, CEO of Charles Taylor Group, awarded the trophies to the winners and thanked all the players for participating. David commented:

“The Greek Shipping Open has quickly made its mark as one of the key dates in the Greek shipping calendar. Yet again we saw a tremendous standard of tennis in all the competitions and I would like to congratulate the winners on their achievement.”

Alistair Groom, CEO of Standard Club, seized the opportunity to wish farewell to Hunter Smith, Regional Claims Director for the Standard Club, who left the company after a career spanning thirty years with Charles Taylor.

Celebrations continued with a reception for all players and non-players. 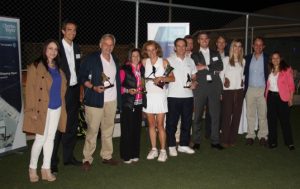 The tournament proved to be a great success with the Greek Shipping community embracing the event with enthusiasm and spirit. The participants were satisfied with the excellent organization and the relaxing atmosphere that prevailed throughout the tournament.

During the tournament, the spectators donated €1, 470.00 for the needs of “The Ark of the World“, an association supporting abandoned children. Father Antonios, founder of the Ark, was also present to receive the money collected.

By popular demand, Charles Taylor renewed their tennis appointment for next year and April 2014. 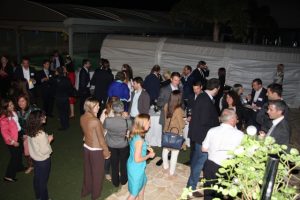 Charles Taylor plc (www.ctplc.com) is a leading international provider of professional services to clients in the global insurance market. The Group has been providing Professional Services to insurance clients since 1885 and today has around 930 staff in 48 offices spread across 24 countries in the UK, the Americas, Asia Pacific, Europe and the Middle East.

The Group offers services across the whole insurance market, principally on a fee-based model and operates through three Professional Services businesses – Management, Adjusting and Insurance Support Services. Charles Taylor also has a Run-off business that owns insurance companies which are closed to new business.

An open book. London artist Mali turns up the volume with a new chapter in his Book series