Friends of the Bahamas celebrates in style: 40 years of Bahamian independence, and arrival of new High Commissioner to the UK

It is a small nation, with a population of 350, 000 spread across 700 islands, but its UK presence is of considerable heft. The Bahamas was thus the focus of one of the great networking events of the year in London, as guests of the independent association Friends of the Bahamas crowded into the Belgravia venue the Caledonian Club. The 2013 get-together of the Friends – organised by its chairman and co-founder Richard Moir –celebrated the 40th anniversary of independence of the country, which retains Queen Elizabeth II as monarch, and the arrival of the new High Commissioner for the Commonwealth of the Bahamas to the UK, His Excellency Eldred E Bethel.

The High Commissioner and Mrs Eldred with Richard Moir (left)

Friends of The Bahamas Association is a membership association, augmented by considerable support from businesses and individuals in the City, the maritime world, trade, property, tourism and other branches of economy and services including law and insurance.

Many of those invited to the reception had maritime connections – the Bahamas continues to make waves as the fifth largest shipping register globally. With some 1, 600 ships, totalling 55m gross tons, the Bahamas is the third largest financial contributor to the International Maritime Organization. The High Commissioner is also his country’s permanent representative to the IMO, and has already presented his credentials to Koji Sekimizu, secretary-general of the IMO. 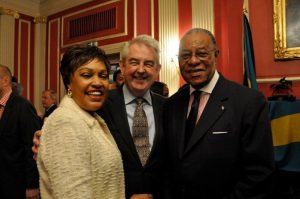 The High Commissioner and his wife with David Caughtrie, Caledonian Club chairman

Baha Mar, a private property company constructing what is said to be the largest hotel, casino and luxury residence development in the western hemisphere near the Bahamian capital Nassau, was the principal sponsor of the evening.  Further key sponsors were Matsuri Restaurant of the West End which offered fine sushi refreshment; and tax advice and company formation specialists Sovereign Group. 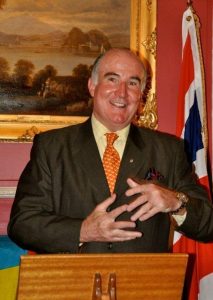 Richard Moir, chairman of Friends of the Bahamas

Mr Bethel told the audience at the Friends of the Bahamas gathering that he was appreciative “of all you do to promote the Bahamas and relations with the Bahamas High Commission.” He was especially pleased to see many Bahamian students at the event.

He said that the nation was about to celebrate 40 years of independence, the day when the Union Jack gave way to the new black and aquamarine flag. In the flag, a black triangle stands for unity and the determination of citizens to develop the land and the sea. Two blue stripes symbolise the ocean, and a yellow stripe represents the sandy beaches of the archipelago. Independence, said the High Commissioner, was the greatest political event for the island since Christopher Columbus set foot on the Bahamian island of San Salvador in 1492. 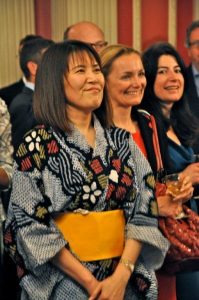 Any Bahamian living abroad who had not returned to the island for five years would be astonished to see the changes in New Providence Island, said Mr Bethel.  The country had worked with renewed vigour to attract investment. 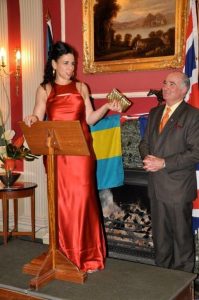 The High Commissioner said that his wife Dawne was campaigning to provide musical instruments for the emerging Band of the Bahamas, which was helping in the development of boys and girls from all walks of life. Donations even of second-hand instruments would be gratefully received.

He concluded by warmly thanking Richard Moir, who serves the Friends as chairman in a pro bono capacity, for his considerable and devoted interest to the Bahamas. 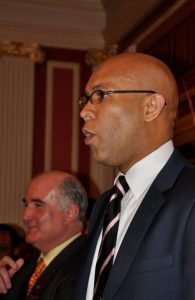 The High Commissioner in addition to his duties in the UK is non-resident ambassador to the European Union, where his mission is accredited to Belgium, France, Germany, Italy, Ireland and Greece.

A former broadcast sports journalist, Mr Bethel served as consul general of the Bahamas to New York from October 2002 to December 2007, and has been executive director of his government’s Information services. 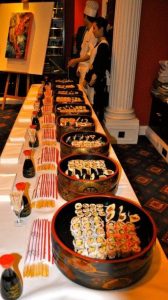 Mr Moir recalled that Friends of the Bahamas was launched in July 1998 at the High Commission. He said that the association, which is registered in the UK,   promotes and encourages cultural, educational and commercial relationships with the Bahamas. The association aimed to create cost effective networking and outreach, complementing the work of the High Commission. He noted that the country’s diplomatic record included the appointment of its first ambassador to Japan, the Bahamian actor and film director Sir Sidney Poitier.

Mr Moir thanked the sponsors for the evening, and praised the work of the Bahamian-born, London-based artist Lynn Parotti, several of whose grand and colourful canvases were on display. Perfumers Penhaligon’s of London added a distinctive touch with an impressive display of fragrances. Members of the Asian Alternative Investments Network (www.aain.co.uk) promoted their forthcoming London event with high profile speakers on May 13; and Ikenobo School of Ikebana (UK and Ireland) provided exquisite flower arrangements. 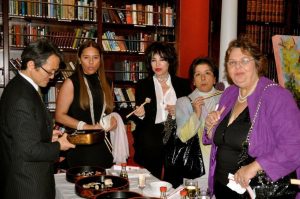 Yoshinori Hatta invites guests to sample Matsuri Restaurant sushi. Maria Dixon, president of WISTA-UK, is on the right, with Maria Ester Bobadilla of Patton Moreno next to her

Dubbed by Mr Moir with his renowned touch of humour “a new form of military manoeuvre, ” a rousing welcome to guests had been provided by members of the band of the London Scottish Regiment.

The evening had begun with a welcome from David Coughtrie, chairman of the Caledonian Club, who said that the name of Bethel was well established in Scotland. The Caledonian Club, founded in 1891, is a private members’ club and the interior of the premises retains many distinguished architectural features.

A recital of Bahamian songs by Melvin Claridge elicited a warm response.