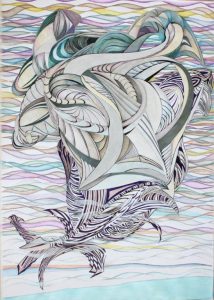 For artwork that Sangeeta Sagar says originates from the subconscious, her paintings and sculptures possess a particularly forceful and acute quality.  Drawing from the well of free thought has resulted in subjects such as the tension between sea and land, and bronze friezes of men and women caught in the midst of ambitious purpose – such as striving for equality and towards expressing their humanity in a crowded world.

The London artist, born in India, encompasses in her portfolio works in oil, watercolour and mixed media, and drawings and sculptures. Throughout, Sangeeta imparts a wonderful immediacy to her work, as she apparently has done from a young age. Nowadays the paintings are compelling, precise abstract kaleidoscopes of subtle and seductive colour.

Sangeeta says: “I started painting at the age of 13, with a village scene in water colours. The freshness of working with a variety of colours inspired me to study fine arts and even go for a Master’s to develop my skills.”

Living in Nature, By Sangeeta Sagar

While at university, she had her first exhibition at Punjab Government Museum and Art Gallery, which started her on the road to a presence at galleries including the Royal Western England Academy in Bristol, and the National Gallery of Modern Art and All India Fine Arts and Crafts Society in New Delhi; and to solo shows in India and Kuwait.

She says: “I have always been passionate to experiment with different mediums. My work is a reflection of my subconscious mind, whereby I start with a conceptual idea and develop it by experimenting with shapes, colours and textures. I avoid predetermining a theme of my paintings, as I feel that could confine my work. Instead I use a fresh canvas as a way to express my thoughts with no limitations. This enables me to freely depict the concept in my mind without being restricted to a particular theme.”

One of her recent paintings, Marine Land, started from the concept of a natural bond. There are three fish entangled in an embrace In the middle of an ocean. “This was to convey that the bond is stronger than any tide.”

Another painting, Floating City, is likewise developed on the concept of fantasy. “I have depicted a metropolitan city from an outsider’s point of view, highlighting the lights and vibrancy by using fluorescent paints.”

As to inspirational figures from history, Sangeeta admires many skilful artists and her all-time favourites are Michelangelo and Picasso. She likes the abstraction of Henry Moore’s sculptures and appreciates his imaginative way with different shapes.

Her figurative sculptures have a rhythmic lift and show an intense understanding of human nature. They are initially created in clay and to emphasise their power, she has gone on to experiment with casting them in bronze (“I had initially experimented with wood which did not convey the power that bronze could”).

“By doing so I was able to convey a theme (unlike with paintings) of relationship, for example the continuous achievements of women in reaching heights.” 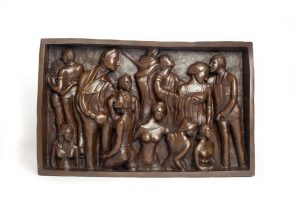 Bronze is obviously an expensive and heavy medium with which to work – one needs a small area to create the maquettes and clay sculptures, but the casting requires a lot of space and equipment which is why it is more practical to do the waxwork and casting in a foundry. Working with the foundry is very time consuming and can take four to five weeks.

Sangeeta exhibited at the VivArtis Autumn Arts Festival in 2009 and since then has been invited to present her work through online galleries such as ArtBridge and Project Art. Links with further galleries may be in store – and her dream is to exhibit at London’s top contemporary art platform, the Saatchi Gallery. 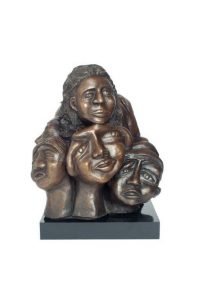 Her current focus is on mixed media on paper, and with the weather improving in southeast England, she plans to focus on sculptures over the next few months.