Baltic dockers’ unions learning from each other on social dialogue

Promoting social dialogue in Estonian ports has been the focus this week of a seminar at the Port of Muuga.

It’s the first event of its kind and has been centered on the joint working of ITF and ETF affiliates, the Estonian Seaman’s Independent Union (ESIU) with their Baltic colleagues at the Norwegian Transport Workers’ Federation. This project is financed by the Norway Grants through the Fund for Decent Work and Tripartite Social Dialogue. Get more information on the programme: www.decentwork.no

Norwegian union members as well as representatives from the Port of Kristiansand Harbour Authority and Norwegian logistics company Seafront Ltd, have been in Estonia sharing their practical experience on how social dialogue works in their own ports and how it’s used as an effective tool to make ports run smoothly.

The Estonian unions expressed disappointment that none of the operators in the Estonian ports industry attended saying: “Most of the organised port workers in Estonia have chosen ESIU to represent them. We are independent from employers, we have experience on social dialogue in the maritime sector and we value our good international relations through ITF and ETF. We are open to dialogue at any time and are very disappointed that the employers have not taken this opportunity to share with us what is an historic international event.” 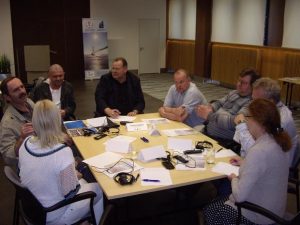 Participants spent much of their seminar time in work groups

Despite the absence of the Estonian employers, unions from both sides felt a great deal was achieved during the seminar.

Chair of the ETF Dockers Section within NTF (Norwegian Transport Workers), Terje Samuelson said: “This event in an important starting point for a project moving Estonian unions towards a system of social dialogue, which is the backbone of industrial relations throughout Europe.”

He continued: “We have been able to demonstrate that unions and employers don’t need to be constantly in dispute, in fact, a functioning system of social dialogue avoids conflict as employers and employees are able to discuss and resolve problems before they escalate. We have been lucky to have employers from a key Norwegian port who have been open and honest and prepared to engage with trade unions in both countries. We hope that the Estonian port employers will see the benefits of this kind of relationship and join us for the next seminar in September, which will be in Norway.”