Friday 17 May 2013, 16:18  by Nigel Lowry – Greece-based owner also enters accord with yard for rare reefer newbuilds

The order will increase the group’s fleet of modern bulkers to 30 in the next three years.

Intriguingly, however, the long-time reefer industry stalwart has also initialled an accord with the Chinese yard that may lead to construction of four refrigerated vessels.

There has been a near dearth of reefer newbuildings in recent years and the Greece-based owner has sought to renew its reefer fleet with secondhand purchases, making it one of the most active dealers in the sector.

Despite this, its fleet — which once stood at about 120 vessels — now has just 29, according to a recent fleet list.

The separate memorandum of understanding with Jinglu, described as “not precisely an order”, foresees both parties working together to build four reeferships, with heavy design input from the Laskaridis camp. 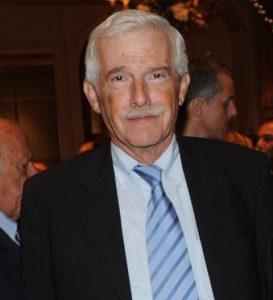 Confirming the agreements to Lloyd’s List, Panos Laskaridis said the group “had something specific in mind”.

Details of the class of reefer contemplated are scanty, but the company is not thinking of building reefers limited to a single application.

The Greek operator may also have partners in the project.

Mr Laskaridis’ brother Thanassis, one of several prominent shipowners accompanying Greek prime minister Antonis Samaras on an official visit to China, is understood to have signed the agreements with Jinglu on Friday.

That lifts the total number of ultramaxes on order in China for Laskaridis to 14, four booked at Jinhae Heavy Industry, two at Jinling Shipyard and eight at Jinglu.

Laskaridis also signed contracts for two kamsarmax bulkers, plus two options of the same type and confirmed acquisition of another two resale panamaxes from Jinglu. Brokers suggested the latter were priced at about $20m each.

The company’s currently trading dry bulk fleet of 12 vessels consists mainly of panamaxes ordered from Jinglu or taken previously from the yard as resales.

It also has one kamsarmax and four post-panamaxes, two of which are under a joint venture with compatriotChios Navigation.

Prices for the new orders are described as “attractive but not far from market levels”.

All the bulkers are scheduled to be delivered by 2016.

Although Laskaridis was not among the Greek owners cementing ship finance pacts with Chinese banks on the sidelines of the prime minister’s trip to China, it has reportedly secured Chinese finance for a first bulker and is said to be in discussions with China Development Bank on financing a further four units.

Previously, the group has explained its big move into the dry bulk sector as a necessity, given the atrophying reefer business and its need to establish itself in a sector that offers a future for the younger generation of the shipowning family.

Baltic dockers’ unions learning from each other on social dialogue

WISTA Denmark and WISTAs of the north