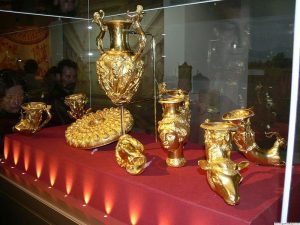 Gold treasures unearthed by chance add lustre to the spectacular heritage of the Bulgarian city of Plovdiv,  By James Brewer

Talk about a dish to set before a king! Fashioned more than 6kg of gold, a dining set on view in replica form at one of the most intriguing museums in the Balkans is fit to grace any royal table – but no-one knows for sure the identity of the prosperous ruler who revelled in such possessions 2, 300 years ago.

These days the collection – a copy of by far the largest gold hoard in Bulgaria – is a dazzling highlight at Plovdiv’s superbly laid-out museum of archaeology. Known as the Panagyurishte Gold Treasure, the originals were crafted in the town of Lampsakos in Asia Minor, and comprise nine gold vessels with a total weight of 6.146 kg.

This priceless cache was unearthed by chance in December 1949 near the town of Panagyurishte by three humble workmen. The brothers Pavel, Petko and Michail Deikovi were extracting clay for a tile factory when they stumbled upon the stunning set of table vessels. What reward if any they came by is unrecorded, but what is clear is that they must have been honest fellows.

They had found a phial (dish) and eight rhytons (cups) of inspired design in 23 carat gold. One is in the shape of an amphora and the others show heads of women or animals. Dated to the beginning of the third century BC, the vessels are thought to have been owned by one of the Thracian rulers of the Odryssian clan.

Judging by the decoration, Greek mythology was to the fore at the time courtiers and guests sipped wine and feasted from the luxurious dinner set. Depictions have been identified of Hera, Artemis, Apollo and Nike, and Amazons, a ram’s head, and a stag. 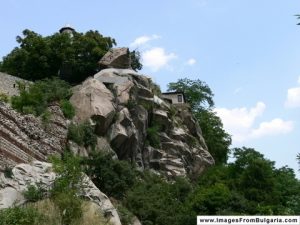 While we are talking of gold, we should admire too at the museum various items from a funeral mound of the fifth century BC including a gold pectoral with embossed lions and deer and the head of the Gorgon Medusa; and nearby, more gold ornaments.

Among its 60, 000 coins, dated from the fourth century BC to the 20th AD, the museum has money from the time of Philip II, founder of Philippopolis, an early name for Plovdiv. There are in one display more than two dozen gold coins from his reign, together with others of Alexander the Great (336-323 BC) and Demetrius I Poliorketes (359-283 BC), part of a collective find. A few paces away, another cabinet displays 16 bronze coins from the era of Philip. 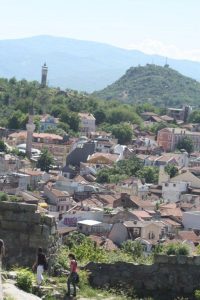 A fine view from ruins of Thracian fort, Plovdiv

In all, Plovdiv Archaeological Museum boasts holdings of 100, 000 artefacts related to the history of the region, and is revealing about the origins of the Thracians. At the end of the Late Bronze Age (14th century to 12thcentury BC) those who dwelled between the Carpathians, Black Sea, Aegean Sea and the rivers of Morava and Vardar began to be classed as Thracians. The term was perhaps mentioned for the first time by Homer in the Iliad, with the meaning of “brave, courageous.”

The Odryssae, many of whose rulers had a predilection for the gold that was worked frequently there, inhabited the region of Plovdiv from the fifth to the first centuries BC. They were the only people among the 46 known Thracian tribes to institute government headed by royalty. They held sway over what is the present territory of Bulgaria, the northwestern part of Turkey and the northern regions of Greece. This society was held together without a written language, a strange phenomenon when one considers the attention paid to art and design. The ritual character and symbolism of the Thracians’ artworks seem to have been a substitute until the Hellenic language assumed dominance with the arrival of Philip of Macedonia.

He stamped his brand on the city that the Thracians had called Eumolpia, by renaming it Philippopolis. Atop a hill today stand the ruins of an ancient Thracian fort that was patched up by later Roman builders, part of a grand rebuilding that included city gates, a forum, amphitheatre, street paving and many other amenities. 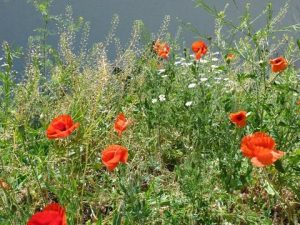 Of those ancient “brave and courageous” early Thracians, the most famous is undoubtedly Spartacus, who led a revolt of slaves against the Roman republic. Kirk Douglas in the 1960 film of the era ensured that  the name of the warrior Thracian lives on.