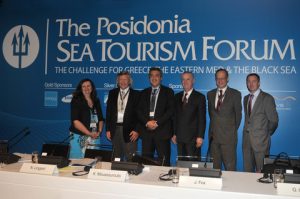 Of the Euro 36 billion plus revenue spread across European cruising destinations, Greece is the recipient of just Euro 600 million due to its lagging home porting capabilities and infrastructure challenges as only nine of Greece’s 57 ports are capable of hosting cruise liners, heard the 300 delegates of the 2nd Posidonia Sea Tourism Forum being held in Athens from 28-29 May.

But this is likely to grow once recent legislation changes become fully effective and as soon as planned infrastructure improvements are implemented, according to the Greek Minister of Shipping, Maritime Affairs and the Aegean, Konstantinos Moussouroulis, who was speaking at the opening session of the two-day event during a panel debate about the growth prospects of the international cruising industry and its impact on the Eastern Mediterranean and the Black Sea regions.

“Greece has many competitive advantages as a tourism destination and the Greek government continues to evolve the legislation framework pertaining to sea tourism activities including the law for the lifting of cabotage, ” said the Minister.

Representatives of the world’s two biggest cruise lines agreed that Greece is extremely popular as a destination for their companies but the country still needs to do more in order to realize it full potential.

He also expressed his confidence that the best days of cruising in Greece are just in front of us as the effects of the lifting of cabotage will become evident with the deployment of non EU flag vessels for home porting in Greek destinations.

John Fox Vice President Government Relations US and Europe, Royal Caribbean Cruises, which brings more passengers to Greece than any other cruise operator, also agreed that the removal of cabotage was a step to the right direction and added that in order to fully reap the rewards of cruising, Greece has to also address a few more issues and market itself as part of a regionwide ecosystem as opposed to following a more fragmented marketing strategy. 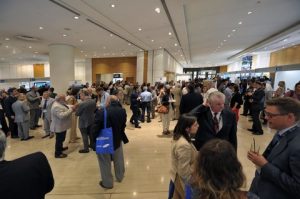 Snapshot from the exhibition hall

He added: “The entire East Mediterranean and Black Sea region is the most mystical and magical in the world but Greece in particular is the only cruise hub in Europe which can offer a variety of packages and itineraries with short distance between ports which makes it good for business due to lower fuel costs.

The current volatility of fuel costs is in fact a key challenge facing the cruise industry according to Rob Ashdown, Secretary General of (Cruise Lines International Association (CLIA) Europe, who also participated in the discussion. “Greece is currently the third most popular European cruising destination and its ranking can further improve if it can introduce a birthing policy designed to reduce congestion and keep port fees and charges aligned with the competition, ” said Ashdown. The 2nd Posidonia Sea Tourism Forum thanks the following sponsors for their support: Gold Sponsors Greek National Tourism Organisation & Samsung Electronics Hellas, Silver Sponsor Piraeus Port Authority and Sponsors RINA, Louis Cruises, Dubai Maritime City Authority and MVS Associates.