London artist Linda Sutton conducts – with paint brushes rather than batton – a lyrical reading of the the world’s greatest operas. In a series of fresh and melodious paintings, a constellation of stars floats elegantly on to her stage.

Four of her new works are in the Small Paintings Group exhibition at the Russell Gallery, Lower Richmond Road, Putney, until June 8 2013. All members of the Group submit up to four paintings each, and the show has 100 modest (in scale but not execution) works in total.

Linda is an active member of the group and on the international scene: her work has been selected several times for the Royal Academy summer exhibition, and she has had solo shows in London, Dublin and Italy.

She is entranced by opera performance, and this is reflected in artwork which is at the same time sumptuous and ethereal. She captures what she says is the vulnerability of operatic singers in front of an audience. The pallor – as mixed to a hue of pale blue in her palette – of the performers expresses the nuanced and tender quality of their demeanour under the lights.

A viewer of her portraits seems transported into a grand theatre audience, and ensnared by the comportment of the principals immersed in their tragic or triumphant tales.

Enter, stage right, into this heady environment a representation of Angela Gheorghiu, whom Linda has painted previously in an imagined scene from I Paglicacci, and now appears as though in La Bohème. For the soprano, once described by a New York newspaper as the world’s most glamorous opera star, this is one of her calling-card roles (in 2007, Ms Gheorghiu appeared in a broadcast of La Bohème from the New York Met beamed to 1.5m people in theatres elsewhere). In Linda’s portrait, a dark winter sky and stark environment contrasts with the evanescent beauty of a doomed young woman.

In Il barbiere di Siviglia, we see Joyce DiDonato, whose mezzo-soprano voice according to The New York Times is “nothing less than 24-carat gold, ” in one of her renowned roles, that of Rosina which never fails to wow the crowds. We cannot see Rosina’s eyes as she gazes down from her balcony, but it is as though she is bringing all her intellect and spellbinding beauty to bear on us directly.

Next comes the intensity of the cantata Carmina Burana, with an innocent maiden (on this occasion not modeled on someone famous) clutching the wheel of fortune but very much aware of the heavenly (a very blue heaven) entreaty of the angels. Carmina Burana is not an odd one out in this series, because although best known as a choral work, its composer Carl Orff intended it to be a stage choreography.

The last of Linda’s current quartet brings us to the Russian soprano Marina Poplavskaya as Marguerite in Gounod’s Faust. This is a magical interpretation, with a stardusting of silver artfully linking the diva’s dress, jewellery and the backdrop for the scene.

Another star to have inspired Linda’s studio attention recently is the young Peruvian tenor Juan Diego Flórez a Peruvian, already known for many roles including Count Almaviva in Il barbiere di Siviglia. Her latest visit to the Royal Opera House, Covent Garden, had her enthralled by Jonas Kaufmann in the title role in Verdi’s four-and-a-half-hour opera Don Carlo, conducted by Antonio Pappano. Mr Kaufmann incidentally was Faust alongside Ms Poplavskaya as Marguerite n the Metropolitan Opera’s 2011 production of the French work. 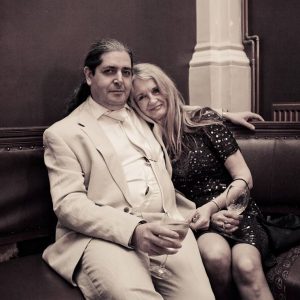 Also on Linda’s recommended list is Ballo, playing at London’s Little Opera House at the King’s Head, Islington. This version of Verdi’s Un Ballo in Maschera is based on the assassination of King Gustav III of Sweden, and director Adam Spreadbury-Maher has set it in an Ikea homeware store on the North Circular Road.
Linda and her Italian-born husband Dominic spend part of their time in Calabria… taking in en route as many evenings at the opera as possible.