In the tracks of the charioteers: architectural marvels of the Roman Empire spring back to life after nearly 2, 000 years – in Plovdiv, Bulgaria

In the tracks of the charioteers: architectural marvels of the Roman Empire spring back to life after nearly 2, 000 years – in Plovdiv, Bulgaria,  By James Brewer 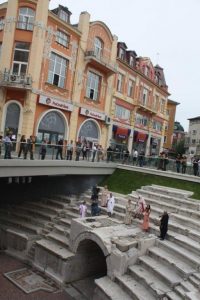 People popping out to transact business at the monumentally built main post office in the Bulgarian city of Plovdiv, or heading for a break at a café in the adjacent elegant main pedestrian thoroughfare, are soon reminded that this area has been a hub of social activity for millennia.

They cannot possibly miss a prominent excavated section of the extensive site of the Odeon, dating from the time of Vespasian (Roman emperor from AD 69 to 79), where the city council gathered and the authorities kept a library.

The Odeon was part of the forum for the city, then known as Trimontium after its three conspicuous hills, the most important metropolis in the Roman province of Thrace. After later reconstruction, the forum was used as a small concert theatre seating 350 spectators. 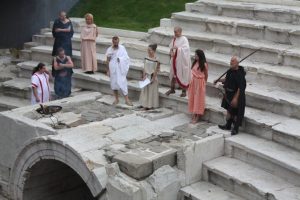 The town, says historian and curator Antoaneta Asparouchova Perdikasteva of the Ancient Plovdiv Association, was on the military crossroads between east and west, and there remains much evidence of what second century essayist Lucian called “the largest and most beautiful of all cities.”

Plovdiv is one of the oldest cities in Europe. It was a Thracian settlement named Eumolpia after the mythical Thracian king Eumolpos, son of Poseidon.  The problem with the Thracian tribes, says Antoaneta, is that they failed to unite, although they made many advances – one can see how the Thracians worked skilfully with gold, she emphasises.

Philip II of Macedonia conquered the area in 342–341 BC and renamed the city Philippopolis. It already had fortified walls and considerable infrastructure.  After subsequent seesawing in control, emperor Claudius in AD 46 consolidated the Roman hold on the city, which was further endowed with fortifications, paving, sewerage and an aqueduct. 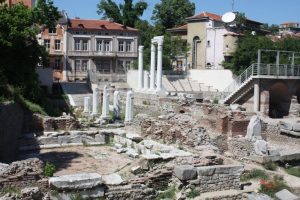 Remains of the Odeon, Plovdiv

The Odeon, in the northeast of the forum, was covered with a wooden roof and went through four principal construction periods (including rebuilding after it was burned down by a Gothic invasion in 251 AD) up to the fourth century AD, and historians are pleased that the sub-structure has been well preserved.

Archaeologists defined the main elements of the site in 1988, and the municipality says that it is grateful to the AG Leventis Foundation for helping fund the restoration. Established in 1979, the foundation honours the Cypriot entrepreneur Anastasios G Leventis (1902-1978) by dispensing money for the dissemination of cultural heritage, with particular emphasis on Greece and Cyprus.

As the civic centre, the forum was surrounded by porticoes and rows of shops on three sides, and its fourth side was occupied by public buildings.

A further marvel clearly traceable today, Plovdiv’s ancient stadium for athletic games and chariot races (and music, poetry and art competitions), is one of the best preserved in the world – and it is located under what is now the busy main shopping boulevard. The tragedy is that restoring it in full cannot be done, for that would mean ripping up almost the entire retail sector of the city centre, displacing facilities ranging from banking and a casino to McDonald’s. 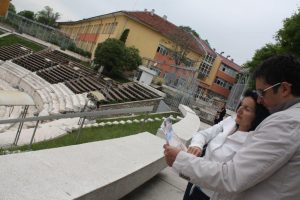 The stadium was built at the beginning of the second century AD during the reign Emperor Hadrian, but itsmodern inauguration took place as recently as April 2012 at its exposed northern end, in what is now called Dzhumaya Square. Visitors can descend by an iron staircase or by elevator to the original level of the stadium, where from one of 14 semi-circular rows of seats you can see part of the track. The exposed area of the stadium is the setting for occasional playlets with actors in Roman dress, and for folk music shows.

The stadium, 250 m long and 50 m wide, could seat up to 30, 000 spectators. Its importance has been underlined by conservation support from the Financial Mechanism of the European Economic Area to the regional administration, Plovdiv Municipality, the Association for Cultural Tourism and the Norwegian Directorate for Cultural Heritage.

What can be seen in pretty well its full glory, thanks to dedicated efforts of repair and care, is the amphitheatre which was constructed in the reign of Trajan (98-117). Sited on the southern slope of the Three Hills with wonderful views over the city and of the distant Rhodope Mountains, it affords a remarkable window on the splendour of the Roman Empire. 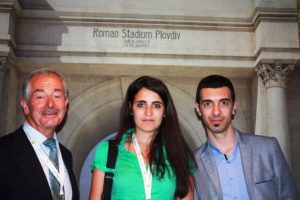 Here in addition to gladiator battles and animal fights were organised poetry, music and singing competitions, events cheered on by 6, 000 spectators. Visitors can walk down to the stage, which used to be highly decorated with statues, or they can contemplate the scene from one of the remaining 20 out of 28 rows of marble seating. The theatre was unearthed during 1968-79 in a Plovdiv Archaeological Museum dig, and now echoes its glories of 1, 900 years ago with summertime plays and shows.