Isabelle Ryckbost comes with an extensive background in EU policy-making and ports. She worked for more than fifteen years in the European Parliament, where she led the office of Dirk Sterckx, a Belgian MEP who was member of the Committee on Transport and Tourism. During this period, she worked on a number of port-related files, including the two port service Directive proposals and the maritime safety packages. In 2009 Isabelle Ryckbost joined the port sector as Director of the European Federation of Inland Ports (EFIP), which operates from the ESPO offices in Brussels.

“I very much welcome Isabelle on board”, said ESPO Chairman Santiago Garcia-Milà, “We are all confident she will do a great job. Apart from her professional and personal qualities, she is a true insider in Brussels and has an already operational network in our sector. This will ensure a very smooth transition.” 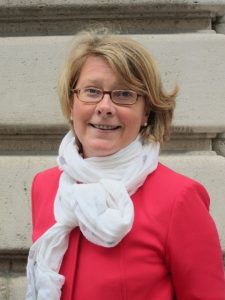 “I feel honoured to be appointed as ESPO’s new Secretary General. Replacing Patrick is quite a challenge I must say. But, with the support of the members and the assistance of a strong team at the secretariat, I hope to continue the good work of my predecessor. I look forward to representing Europe’s seaports in Brussels. Ports are more than a business sector, they seek to combine economic and public interests. Being the main trade gates to Europe, they have a crucial role to play for our economy and welfare. But at the same time, ports are the driving force of many regions and have a responsibility towards their local community”, said Isabelle Ryckbost, “I hope, where possible, to help oiling these engines of growth and, where needed, to protect them. I believe each port in Europe has its role and its place.”

Isabelle Ryckbost will take up her new function on 1 August. She will become the third Secretary General of ESPO. Prior to Patrick Verhoeven, who led the secretariat for the past thirteen years, the office was managed by the late Pamela Le Garrec.