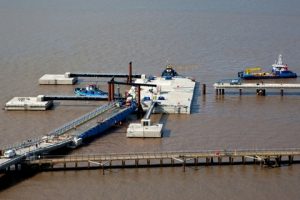 May 28, 2013 – Following the successful delivery of the specially designed linkspan bridge in January, Associated British Ports’ (ABP) £26m Grimsby River Terminal development reached another milestone with the arrival of a large reinforced concrete floating pontoon designed and built by GRAHAM Construction. The pontoon was towed from the River Tyne to the Port of Grimsby, a 123 nautical mile journey which took around 40 hours.

Construction took place on the River Tyne at a dry dock facility where ships have been built since 1904. Locally sourcing the material helped create jobs during the construction phase and boosted trade to over 20 local suppliers.

At 80m long, 30m wide, and 5.6m deep, the pontoon is larger than four Olympic sized swimming pools, and at just over 7, 000 tonnes weighs as much as Tyne Bridge. GRAHAM’s expertise in structural concrete allowed the pontoon to be built using 2, 600m3 of concrete incorporating 800m of specialised self-compacting concrete. Its use – as opposed to imported steel – will allow for better resistance to corrosion and a smaller carbon footprint.

Sean Blissett, ABP Engineering Manager, Humber, said: “GRAHAM’s and ABP’s engineering staff have worked closely to ensure the completed works are in line with our requirements, and the delivery of the pontoon further reinforces the strong working relationship we have developed throughout the construction phase.

“The collaborative approach of both engineering teams has ensured construction efficiencies have been met, and we are on course to provide a riverside berthing facility which meets – and hopefully exceeds – the high standards of our customers.”

Towed by SMS Englishman, the pontoon left Newcastle at high tide on 20 May, before arriving in the Humber last week. When operation commences in July, ro-ro vessels will berth either side of the Finger Pier and unload onto the floating pontoon.