31 May 2013 – Affiliates at the ETF 2013 congress on 29-31 May in Berlin, Germany assessed ETF activities over the past four years and set the organisation’s work priorities for the next four years.

ETF President Lars Lindgren addressed more than 400 participants from over 30 European countries at the congress opening. The theme of the three-day event was ‘From Global Crisis to Global Justice – European Transport Workers Fighting Back!’.

On the eve of the congress the ETF women’s conference discussed the future ETF action plan on gender equality and elected the new women’s committee.

On the first afternoon, there was a debate on the importance for trade unions and European and national policy makers to invest in young transport workers in a Europe where a generation of hopelessness is being created. 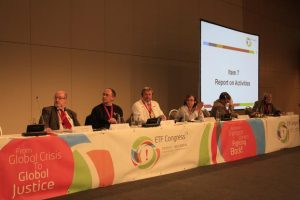 Current ETF general secretary and also candidate for a next mandate, Eduardo Chagas, commented: “Trade union strength is more important than ever as the war on labour continues to intensify. By giving priority, amongst others, to capacity building of its affiliates, the ETF aims to significantly contribute to strengthening its impact on European level and ensure their voice is respected and taken into account by the European institutions and all ETF’s counterparts.”

Public Notification of Amendments to the Rules and Guidance