When Margaret Thatcher received a standing ovation, before she had even begun speaking

When Margaret Thatcher received a standing ovation, before she had even begun speaking,  By Julian Thompson

While attending Lady Thatcher’s funeral at St Paul’s Cathedral, my thoughts turned to the lunch at Guildhall in 1982 after the Falklands Victory Parade through the City of London.

Few people, let alone politicians, have been greeted with a standing ovation before they started speaking.  It happened to Margaret Thatcher at Guildhall, after a lunch given by the Corporation in honour of those who had fought in the Falklands War.  I was sitting at the top table, not far away and just across from her.  As she rose to speak, sailors, soldiers, marines and airmen spontaneously surged on to their feet with a roar of cheering and clapping.  It was one of the few occasions in her life she was taken aback.   But she quickly recovered and, as the applause died away, said, “I should be clapping you.”  Members of her Cabinet, sitting in the vicinity, looked at the scene with jaw-dropping amazement.  The ‘balloons’ coming out of their heads read: “If only that would happen to me.”  I remember thinking, “dream on, chums.” 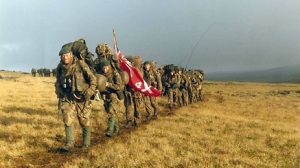 I neither spoke to nor saw Margaret Thatcher during the Falklands War, in which I commanded the Commando Brigade that included two parachute battalions.  She left the commanders at the front to get on with their jobs, dealing only with the Chiefs of Staff.  But, to us fighting the war 8, 000 miles away, it was clear that at the top we had a Prime Minister who was made of sterner stuff than any of her post-Second World War predecessors.  This time there would be no climb-down; no elegant retreats of the kind that the Foreign Office had become so expert at crafting.  Britain, which had built up a reputation for being ‘long’ on advice, and ‘short’ on action, found in her the leader it needed.