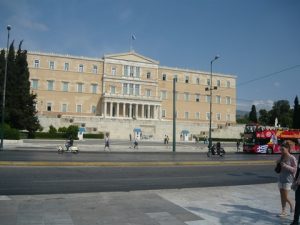 Time and again* this site has stressed the fact that not only is Greeks (government officials –prime ministers, ministers, the lot) to blame for the post junta financial collapse of Greece – add two silent / “hidden” bankruptcies in 1985 and 2009, but also all non-Greeks involved with approving of loans etc., etc., knowingly that they throw good money after bad, but alas, it was a lot of commission and laundered money involved, tax-evasion and avoidance of the few (and conversely the public followed suite), armaments procurement  and buying voters consciousness being the number one and two reasons!  Shame!

Now we read that the IMF admits that there was an underestimation of the financial problems facing Greece back in 2010. The internal report (within IMF) is good only for the bin this very moment… Those Eurozone members who objected to the rapid solution and “save” Greece that particular moment of time in 2010 must pay the damages; otherwise, fairs fair: see you in court. The Greek Prime Minister Antonis Samaras now… “looks” content with these findings of the IMF internal report, equally the Minister of Economics Professor Stournaras, who also says that irrespective of these findings on which we do have a leg to stand, Greece’s obligations must be performed and the press with the opposition celebrate …The madness of King George… We wonder what is next, as otherwise things will get sour. Both must get their act together and do the right thing for the Greek people. Enough of AUSTERITY, enough! Enough from traumatising the elderly and pensioners; enough for sending abroad Greece’s youths, enough. Enough for further destroying the country and its proud people!

It has been mathematically proven that all austerity programmes all over Europe have spectacularly failed as no development has in real terms happened… Did I hear you say Germany and France delayed and objected to the Greek bailout or to the means timely available to save Greece or they wanted to save their skin…? The Greek Government here and now must pay back to the elderly and pensioners the moneys (yes in plural, you dead well know the meaning of money with an “s” at the end) that dictatorially and in reality unconstitutionally under duress obtained/”stolen”, and rectify whatever to make or break. They know exactly where the money the clever dicks fiddled are; they have the mechanism of here and now to tell us. They are conspicuously silent! They know how the moneys where syphoned away, they do! In addition the Greek government/coalition should use all available means to defend the Greek people by using the appropriate human recourses’ specialists and not any Tom, Dick and Hurry it used until now to solve Greece’s problems. The Greek Prime Minister is right that the Greek opposition’s and Greece’s enemies  complaints are null and void,  of how to save Greece and or if Greece can be saved under this administration, but he must bring to justice here and now, we repeat this, here and all the perpetrators who “managed” and  embezzled Greece’s money, public funds, for their own sake,  Oi! Oi!

Things can get off hand to all intents and purposes. Imagine if the Greek Shipping Industry depended on the Greek State’s officials/politicians: they would have rocked the boat from day one!

*Log on to:   https://allaboutshipping.co.uk/2011/12/29/greece-should-the-shit-hit-the-fan/   and other articles  herein, as well as the live interviews available!