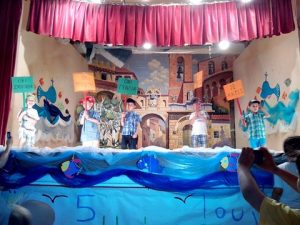 The joint HELMEPA-LRF Marine Environment and Sciences Awareness Campaign successfully drew to a close for the 2012-2013 school year on the island of Rhodes. The Campaign, which is supported by Lloyd’s Register Foundation (LRF)*, is set to continue until May 2014 throughout a further four cities around Greece.

The Campaign at Rhodes was under the auspices of the local Municipality, which also kindly housed the Exhibition on the “Marine Environment, Shipping and Sciences” at the Modern Greek Art Museum “Nestorideion Melathron” Gallery. In collaboration with the relevant educational services of the island of Rhodes, HELMEPA shuttled to and from the Exhibit and updated 1, 080 students accompanied by their 62 teachers, with costs covered by the program.

The 22nd Kindergarten of Rhodes organised an impressive event as part of the activities of the Campaign. Its students, who are children-members of the “HELMEPA Junior” Program, took part in and were awarded First Prize for this year’s Panhellenic Drawing Competition, titled “I’m taken in my dreams to a spotless world that gleams!” in the 5-7 age group. 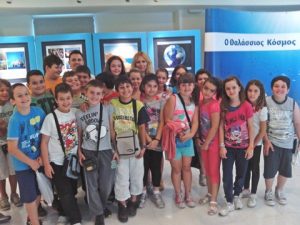 Children at the exhibition

We wholeheartedly thank the Mayor of the island of Rhodes, Mr. S. Kousournas, the Chairman and entire Board of Directors of the Modern Greek Art Museum “Nestorideion Melathron”, the Directorate of Primary Education for the Southern Aegean and also the Central Port Authority of Rhodes for their generous hospitality and support that contributed to the success of the HELMEPA-LRF visit to the island of Rhodes.

*Lloyd’s Register Foundation (LRF) supports the advancement of engineering-related education, and funds research and development that enhances safety of life at sea, on land and in the air.

After successful launch, WISTA Argentina springs into action to link women in shipping throughout Latin America