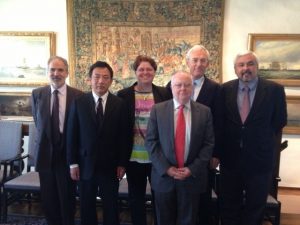 The New ICS Board with Karin Olsen in the centre

The Dutch Shipowners’ Association has welcomed the election of its board member Karin Orsel as one of the four vice-chairmen of the International Chamber of Shipping . Ms Orsel becomes the first woman to attain such a post.

Her election took place on June 7 during the annual meeting of the ICS, which was organised in Oslo at the invitation of the Norwegian Shipowners’ Association. The three other vice-chairmen chosen were Gerardo Borromeo (Philippines), John C. Lyras (Greece) and Esben Poulsson (Singapore).

Ms Orsel is the chief executive of Management Facilities Group and active within the Dutch association as chairman of the economic affairs committee, and as a board member since 2004.

In 2009 she won the Dutch female entrepreneurship prize ‘Vrouwelijke ondernemer van het jaar’, organised by the Federation of Businesswomen. Since 2010 Ms Orsel has been on the executive committee of the ICS.

The Dutch association said in a statement that the decision recognised Ms Orsel’s knowledge in the field of maritime industry and her intensive and valued involvement in several other maritime associations.