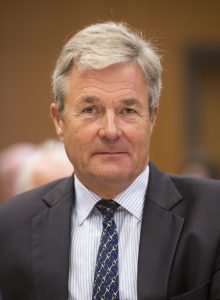 At the AGM, Mr Wolfgang F. Driese, CEO and Chairman of the Board of Managing Directors, expressed his appreciation for Mr Jacobs: “I am very grateful that Mr Jacobs has been supporting DVB’s business development over the past eight years. During this period the Bank has accomplished its mission to become the leading specialist in international transport finance. Due to many years of experience in the shipping industry, Mr Jacobs’ advice has been invaluable, especially in his responsibility as a member of the Bank’s Credit Committee. And, I am also delighted that we have been able to gain Carl Steen, an outstanding expert in the area of shipping finance, who will continue Mr Jacobs’ successful work.”

Mr Jacobs commented: “I have been proud to serve DVB and I have been impressed with its management and staff, who have jointly so competently and carefully navigated the Bank through both challenges and opportunities over the years in the interest of all stakeholders. It is truly a fine Bank.”

Mr Jacobs is succeeded by Mr Steen, who has spent nearly his entire career in the shipping industry. From 1978 to 1983 he was director of I. M Skaugen A/S. In 1983, he joined Christiania Bank Luxembourg S.A. as Managing Director. After 1987 he held several senior positions in the Bank’s Shipping Department and eventually became Head of Shipping, Offshore and Oil Services International Division in 2001 when Christiania Bank merged with MeritaNordbanken and Unibank into Nordea. Between 2007 and 2011 he acted as Head of Shipping, Oil Services & International Division. Today he is the Chairman of the Supervisory Board of Capreca AS and a member of the Supervisory Board of Seadrill Limited, Wilh Wilhemsen Holding ASA and several other companies.

About DVB Bank SE:
DVB Bank SE, headquartered in Frankfurt/Main, Germany, is the leading specialist in the international Transport Finance business. The Bank offers integrated financing solutions and advisory services in respect of Shipping Finance, Aviation Finance, Offshore Finance and Land Transport Finance. DVB is present at all key international financial centres and transport hubs: at its Frankfurt/Main head office, as well as various European locations (Athens, Bergen/Oslo, Hamburg, London, Rotterdam and Zurich), plus offices in the Americas (New York City and Curaçao) and in Asia (Singapore and Tokyo). DVB Bank SE is listed at the Frankfurt Stock Exchange (ISIN: DE0008045501). Further information is available on our website at www.dvbbank.com