Secrets of a society painter: Barbara Kaczmarowska Hamilton tells of portrait sittings with the royals 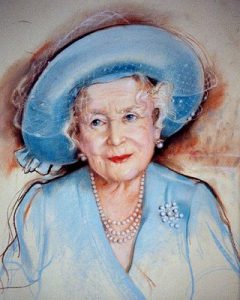 Secrets of a society painter: Barbara Kaczmarowska Hamilton tells of portrait sittings with the royals,  By James Brewer

Her Majesty the Queen Mother, the Princess Royal,  Princess Tatiana Metternich, Prince George of Greece – the list of royal personages, aristocrats and public figures from Europe and beyond who grace the CV of portraitist Barbara Kaczmarowska Hamilton is far-reaching.

Such prestige commissions bring their occasions of stress, UK-based and Polish-born Ms Kaczmarowska Hamilton (known as Basia to family, friends, and distinguished sitters) has admitted to a London audience.

She offered a glimpse of the adventures and anxieties of her assignments when she gave the first of a series of talks entitled In Conversation with the Artist to the new Accademia Club. The group is an initiative by art historian Dr Rosa Maria Letts who is challenging leading artists to tell their inside stories and speak of their technique.

Opening the series on June 12 at the Polish Hearth Club, Basia Hamilton responded to numerous questions from the audience. She agreed that for most people, entering a room to paint a distinguished personality was a psychologically testing experience. “Do you find it unnerving?” she was asked. “Very much so, ” she replied, but “the minute you start painting, you forget who it is, and you get deeply  involved  in your work.”

This was the case with regard to the Queen Mother, whom she painted one year before she died (she  portrayed Pope John Paul  II not long before his passing, and painted the last portrait of Lady Thatcher). 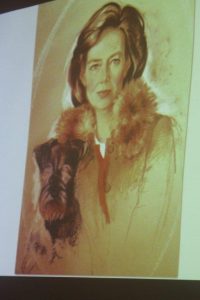 For her second sitting with the Queen Mother, Basia was keen to arrive in advance to have plenty of time to prepare the easel, but her husband did not want to rush. “I cried all the way to Clarence House. I confessed to Her Majesty why I was so upset and asked her if her husband the King [George VI] always did what she wanted him to do. The Queen Mother laughed so much, and said: no he did not, they [husbands] never do, you know.”

The Queen Mother entered looking very smart, and asked Basia: “Is this all right?” Despite having passed her 100th birthday, the grand lady had all her wits about her, and chatted with her visitor about horses and horse racing. The Queen Mother had a great sense of humour. “I told her that the memoirs of my husband’s great aunt Lady Hamilton (whom she knew ) had just came out . She said: ‘How interesting! Are they indiscreet?’ Oh no , I said. What a pity! the Queen Mother answered.”

On the day she was waiting in her studio for her first Royal sitter, Prince Michael, to arrive, she was so tense that she decided to rest on the sofa, and fell asleep. When the door bell rang and the Prince arrived, there was no time for tension as she had to get on with painting.

Painting Pope John Paul II in 1999, she felt a kind of unseen force guiding her hand: “all lines and colours practically placed themselves, ” she has written. 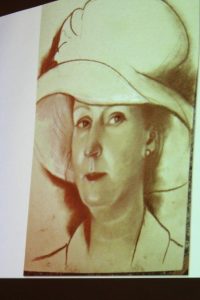 On the art of portraiture, she said: “I always ask the sitters to wear the best clothes and sit up straight, because portraits are forever. Why? When we wake up in the morning, we look at the mirror and say that is not me, but if then we look at our portrait, we say, that is me. I portray my sitters in the way I think they look best and how I believe they themselves would like to look.

“If you see a fashion model on the street they look like nothing, but when they are made up, it is a different matter. Think of pictures you may have seen of Napoleon in his splendid robes – then imagine what impression you would have if you were to see him in a T shirt…” 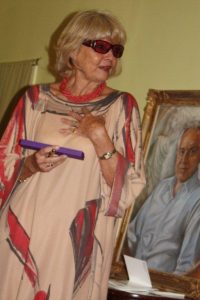 Barbara Kaczmarowska Hamilton with her box of pastels

Dr Letts said the importance of the portrait in creating an agreeable impression dated back hundreds of years – paintings of foreign princes and princesses were shown to monarchs so that they could judge the attractions of suitors for themselves and their offspring. Nowadays, said Basia, we throw away our photos which we do not like, but a portrait is too important to be thrown away – it can be hidden in the attic if need be!

Born in Sopot, a health spa resort between Gdańsk and Gdynia, Basia graduated from the Academy of Art in Gdańsk. In the days of the former Communist regime, she told the London gathering, students at that institution were forbidden to go in for classical styles. “We had to paint abstracts, for six years. They trained us well in composition, graphics, anatomy and perspective.  We wanted to paint realistically but we were not allowed to.”

She continued her studies at the Accademia di Belle Arti in Venice and in Rome, and this Italian interlude was to have a decisive influence on her career, as she explained when asked by a member of the London audience why she mostly used pastels rather than oils.

“My  favourite medium is pastels. I discovered them in Italy and was astonished how easy for me it was to paint with them . With a small box of pastels I could create all I wanted without having to wait till the work is dry, as you do with oils. One just needs to spray the work with fixative, and they are easy to transport..” 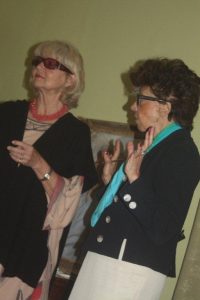 More than that, “my nature comes out in my pastels.” Among techniques, “you can smudge it with your fingers to achieve shadow effects.” For drawing women there are delicate hues, ”and for men I can use more powerful colours.” She says it should be remembered that in the 18th century in France, every chateau had a pastel room.

Is it easier to paint people you know well, or strangers? “There is no difference, except if you know someone you can tell how well you have caught the likeness and small nuances. ” She finds that “people always want to tell a story” and a portrait painter is often looked upon as though they were doctor or psychologist.

Of current practice in the art world, she spoke of the limitations of artists who “can do a line, ” and said that eventually, people will come back to more traditional sketches.

Some of her portraits have an unfinished feel to them. “A great Polish painter, Felix Topolski, told me years ago that people like unfinished works as there is something left to their imagination. I realised from experience that very finished portraits with backgrounds can be less charming than light, unfinished sketches. That old master was quite right.”

She never includes hands in her portraits. “To paint a face is a challenge and thrill, to paint hands is work that is quite boring.”

Dr Letts said that Basia Hamilton follows her subjects instinctively, whether they be Sardinian fishermen in her earlier work, or someone of more formal bella figura. As soon as one portrait by the artist came up on the lecture screen, Dr Letts declared: “I can see that this is a very theatrical person.” The latest portrait, of Princess Diane de Luxembourg, immediately elicited the comment: “She is very beautiful.” The portrait was made earlier this year,  at Hillenraad Castle, in the Netherlands.

The Accademia Club plans further regular conversations with artists at the Polish Hearth Club in Exhibition Road, Kensington. Entrance is free, and there is an optional lunch for which there is a charge.

An extremely good article which reflected well the conversation showing also further research on the subject. The recording of a happy artistic encounter.

Well lots of posh people painting other posh people. who cares nobody knows her in her country and nobody cares she is not that good. If she didnt marry that Ian Hamilton ( Lazy bloke) she would never ever be able to paint those people