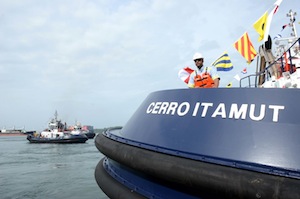 The stern of Cerro Itamur

Panama City, Panama, June 19, 2013 – The Panama Canal has increased its tugboat fleet with the arrival of the first two of 14 tugboats that will improve the waterway’s resources to offer a safer and more efficient service to the global shipping industry. These tugboats will strengthen the Canal’s capacity for the operation of the Third Set of Locks.

“These new tugboats will allow the Panama Canal to continue offering a world-class service, ” Panama Canal Administrator Jorge L. Quiijano said. “They will help us prepare to face the challenge of operating the new set of locks with the same efficiency.”

Cerro Itamut and Cerro Picacho are part of the new fleet of 14 tractor tugs that will be arriving within the next 12 months from Spain. Astilleros Armon, S.A., a Spanish ship-building company, was awarded the contract in September 2011, after an open tender with the participation of 20 companies from different countries in South America, Europe and Asia.

According to the Panama Canal Administrator, towards the end of next year and after retiring those tugs reaching the end of their lifespan, the Panama Canal will have a fleet of 44 tugboats to face the operational demands of the current and expanded Canal. 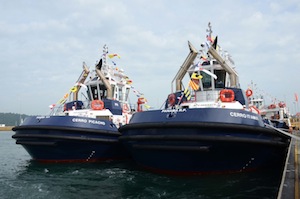 The Cerro Itamut and the Cerro Picacho

The additional capacity will allow assisting Post-Panamax vessels that will be transiting the expanded Canal, which will not require the use of locomotives used in the existing locks.

The new tugs Cerro Itamut and Cerro Picacho were incorporated to the Panama Canal fleet today in a christening ceremony in the Gatun Landing, Colon Province, together with the ferry 5 de noviembre and the tugboats Estí and Rio Bayano I, that are part of a previous generation.

The names of these new boats are taken from different landmarks around Panama.

Boat christening is a tradition in the Panama Canal and among the shipping industry to ensure the good fortune of each new vessel and its crew.

About the Panama Canal Authority (ACP)
The ACP is the autonomous agency of the Government of Panama in charge of managing, operating and maintaining the Panama Canal. The operation of the ACP is based on its organic law and the regulations approved by its Board of Directors. For more information, please refer to the ACP’s website: http://www.pancanal.com/.

Secrets of a society painter: Barbara Kaczmarowska Hamilton tells of portrait sittings with the royals