Harbour expansion will boost growth potential of Port of Esbjerg

The Mayor of Esbjerg Johnny Søtrup – at the new Østhavn

The largest harbour in Denmark expands when the Port of Esbjerg’s new Østhavn (“East Harbour”) opens Friday 21 June. The 650, 000 square metre expansion of the harbour will consolidate Esbjerg’s position as the leading North Sea port for the wind turbine industry and increase its potential to develop and grow other business areas.

Esbjerg is the EnergyMetropolis of Denmark, and has recently been nominated to become a member city of the exclusive World Energy City Partnership.

Grand opening
The opening ceremony will be attended by the Mayor of Esbjerg, Johnny Søtrup and the Danish Minister of Transport, Henrik Dam Kristensen. To indicate the significance for the entire city, all citizens of Esbjerg are afterwards invited to a harbour festival with music and entertainment.

The new section of the harbour in Esbjerg covers 650, 000 square metres, the equivalent of about 100 football pitches. It has taken two years to build and the investment amounts to approximately 100 millioner euro. 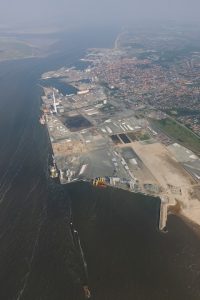 – Handling offshore wind turbine traffic has become more and more demanding with respect to infrastructure and harbour facilities. Our new Østhavn is big enough for even the largest of wind turbines. Having that capacity is crucial in the ever-more competitive market for offshore wind projects, says Port Director Ole Ingrisch,

A strong international harbour in the EnergyMetropolis of Denmark
Esbjerg’s Mayor Johnny Søttrup is pleased that the new harbour will enable the Port of Esbjerg to continue to meet demands in the future. He acknowledges that the success in Esbjerg by large is due to the enterprising and adaptive nature of the city that has transformed entirely from fishery to business in the energy sector:

– The development in the energy sector is rapid, and we experience a huge demand of offshore wind turbines in the North Sea. It is therefore essential that the Port of Esbjerg had vision and foresight to for instance expand the harbour. We are now not only able to meet demands but also to take an active part in shaping the future development, says Mayor Johnny Søtrup.

Facts about Esbjerg Harbour and the new  Østhavn 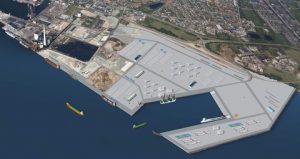 Visualisation of Port of Esbjerg

• Esbjerg Harbour is Denmark’s largest in terms of space. The Harbour is home to more than 200 businesses and provides work for more than 8, 000 people.
• The three main business areas at the harbour are offshore wind, oil and gas, and intermodal transport (ro-ro).
• The new Østhavn section of Esbjerg Harbour has been under way since 2011 and has come about after an investment of more than DKK 500m.
• Once this stage of the new harbour section is fully completed, Esbjerg Harbour will have grown by 650, 000 square metres of new space and by 1.2 kilometres of new quays. The Østhavn has been built specifically for the pre-assembly and shipping of offshore wind turbines, and Vestas and Siemens have already moved in.