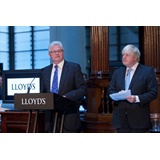 Mayor of London Boris Johnson has highlighted the critical role the Lloyd’s insurance market plays in the London economy along with the need to continue to attract international investment to the City.

He spoke today to a packed audience of Lloyd’s market participants in the historic Underwriting Room and was joined by Lloyd’s Chairman John Nelson.

Addressing the crowd of over 3, 000 people, the Mayor said: “The Lloyd’s insurance market plays a vital role in both the public and private sector. Responsible for revenues of $40bn, Lloyd’s contribution to the success of the City of London is huge.

“Ever since Edward Lloyd first decided to insure maritime ventures 325 years ago, Lloyd’s has been making possible the most extraordinary commercial developments in the City of London and despite the financial difficulties we have been going through, this city remains the most innovative, fertile place for development because the risks can be insured.”

Speaking of the Underwriting Room in the iconic Lloyd’s building, the Mayor said: “This room is the engine of capitalism.”

He added: “Lloyd’s has a glorious future and I hope the market will go on to make this leap across the world in its quest to pursue international markets for insurable risks.”

John Nelson also discussed Lloyd’s contribution to the growth of the London economy and its vision for international growth.

He said: “The insurance market has performed strongly and robustly, despite the economic slowdown and financial crises of recent years. There is recognition now of the huge contribution that insurance – and particularly specialist insurance – plays in economic growth and most importantly, economic security.

“Lloyd’s is the epicentre of the London and global specialist (re)insurance market. 80% of our business is written outside the UK but by far the majority of this is written in the developed world, with the US being our largest market counting for 40% of our total business.

“However, we are acutely aware that the global economy is changing and in 20 to 25 years’ time, 70% of global GDP will be in the emerging economies, a total reverse from today where 70% is in the developed economies.

He added: “This market has extraordinary prospects for truly global growth and it is the intention of this market to ensure that Lloyd’s footprint extends into those emerging territories ; this is at the heart of our Vision 2025.

“We want to make sure that Lloyd’s and London remain the global hub of specialist (re)insurance.”

The event comes a year after Prime Minister David Cameron visited Lloyd’s to launch Vision 2025, a strategy for the Lloyd’s market which aims to position Lloyd’s to take advantage of the opportunities presented by the world’s developing economies. China, Brazil, Mexico, India and Turkey have been identified as high priority countries for the market, as well as Lloyd’s existing large developed markets.

The importance of attracting international investment to London was also highlighted by the Mayor of London earlier this year. In January, Boris Johnson set out his 2020 Vision for London, which highlights the Capital’s position as an economic powerhouse. In a speech to business leaders he said that London contributes a greater share to the UK’s economic output than at any other point in history. He added that the government “must invest in London’s future for the good of the whole of the UK” and that “we must continue to attract international investment”

Positive strides in growing the number of female seafarers