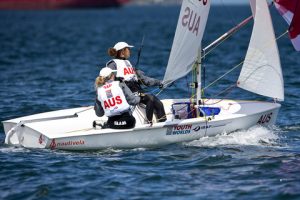 Tuesday 9 July 2013 – One hundred and twenty 420 sailors will make up the 32-boat Boys and the 28-boat Girls fleet at the Sail First ISAF Youth Sailing World Championships in Limassol, Cyprus.

One point separated the Australians and Italian winners heading into the final race in Dublin but a fourth from Paternoster and Di Salle was enough to seal gold as Smith and Clark came through in tenth.

Smith and Clark will be competing in their third ISAF Youth Worlds and they come into the event with high hopes, “I’m feeling more and more confident in our ability as a team to bring home gold this year, ” said Clark. “We’ve worked hard over the past years with our experience and competitive drive increasing and despite any setbacks we’ve had, Carrie and I both share the same competitive streak and determination to win it this year.”

The 2013 Sail First ISAF Youth Worlds will be the last appearance of the Australian girls and their partnership both on and off the water has flourished over the years, “I have been so lucky to be a part of such an amazing team with Carrie and we had worked hard to qualify for Youth Worlds for the first time at the age of 15 in 2011.

“It was amazing to attend the event at such a young age with the ability to improve each time. The ISAF Youth World Championships is an incredible event that I’ve loved being a part of and involved in. I hope for our last year we can make it the most memorable and generally just have another great time with the team as well as the other countries.”

If Smith and Clark are to win in 2013 they will have to go through defending champions Paternoster and Di Salle.

Ahead of the event the Italians have been working hard to ready themselves for the 11-race series, “We hope we can win again, ” said Paternoster. “We’re in Imperia, Italy for a session of training to prepare for the event. We expect a hard and difficult competition in Cyprus.”

Chile’s Nadja Horwitz will be competing at her fourth ISAF Youth Worlds in Limassol and has made strong gains since her first appearance in the 29er in 2010. She finished 16th in Istanbul, Turkey before switching to the 420 where she came through in sixth in 2011 and fourth in 2012.

With several Championships under her belt Horwitz, sailing with Carmina Malsh and aided by Athlete Participation Programme support, will fancy her podium chances. She won silver at the 2012 420 Worlds and has honed in her racing skills by sailing the 470 at ISAF Sailing World Cup Palma and the Open 470 European Championships, finishing 29th and 30th.

Alongside Horwitz on the Athlete Participation Programme will be Mexico’s Maria Pelayo and Camila Flores.

Of the other top twenty competitors from 2012 only Singapore’s Kimberly Lim and Savannah Siew and Korea’s Nakyung Lee and Seoeun will make reappearances at the event that welcomes several fresh faces.

Stekelenborg sailed as crew with Pieter Goedhart and took bronze in a tight fight the medals that saw the Spanish prevail followed by the French in Dublin Bay, Ireland.

Floris van de Werken will be taking the Dutch helm in 2012 after Goedhart stepped aside, “I started sailing with Floris because Pieter stopped sailing and I really wanted to go further so we started in the 470, ” said Stekelenborg. “When the chance to qualify for the ISAF Youth Worlds came we thought about competing and now we are going.

“We’ve prepared ourselves by training a lot in the 420 and 470 sailing in as many regattas as we could.”

Although Stekelenborg is the only 420 Boys Youth Worlds medallist in the fleet he is relaxed about his chances to repeat and better his 2012 performance, “I don’t know if the other competitors will look at me for winning the medals because there are lot of good new teams.

“We don’t have high expectations because we don’t know what to expect.”

Spanish crews have dominated the 420 Boys in recent years as Jordi Xammar and Joan Herp won gold in 2010, Xammar returned in 2011 with Alex Claville to defend his title and twins David and Alex Charles kept the run going in 2012.

Pedro Martinez and Luis Bugallo will wear the Spanish 420 boys colours in Cyprus and do not feel under any pressure to perform, “The last Spanish sailors in the 420 who won the event are very good sailors. We don’t feel any pressure and we must sail as we are now by not thinking of past results and our team mates.

“We are excited to go the regatta which is going to be in a wonderful place. Our first objective is to enjoy sailing and with this reach our sporting objectives.

“We started to prepare for the championship last month because we have had a lot of exams this year. We would have liked more time but this was impossible so we hope our intensive preparations are sufficient.”

With many unknown quantities in the 420 Boys fleet heading to Cyprus the first two days of racing will be crucial in setting a benchmark.