Twenty nine 29er teams and 15 SL16 teams will take to the start line when racing commences on 15 July.

The Open 29er will feature 58 sailors across 29 teams with the 2012 silver and bronze medallists’ helms returning with new crews.

French silver medallist Lucas Rual will be sailing with Emile Amoros having taken second spot in 2012 with Thomas Biton who has since stepped away from the 29er.

“Lucas is a great skipper, ” said Amoros, “We have trained really seriously and have already won Eurocups this year in Spain and Cavalaire. These regattas are the best training. We have sailed together since September and my former skipper was too old and his [Rual’s] crew Thomas stopped so we naturally sailed together and it’s really great. 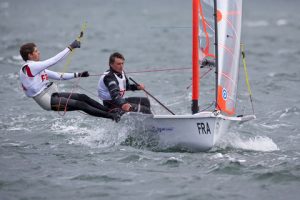 “We are really excited as this regatta is our main goal. Lucas is bringing me a lot of things because he has already done this regatta, he has told me that it is really intense and I can’t wait to discover this different regatta with a smaller fleet.”

Like Rual, the Argentinean bronze medallist Klaus Lange brings a new crew into the event. Lange’s 2012 crew Mateo Majdalani is too old to compete meaning Ignacio Varisco will crew with Lange and the French see them as potential rivals, “We think for sure the Argentineans will be tough competitors, ” added Amoros.

“Germans, British, Australians and the Americans are good also. This regatta is going to have a really good level.”

Coming into the event with good form is Brazil’s Antonio Aranha and Philipp Essle. The pair recently won under 18 gold at the South American 29er Championship in Rosario, Argentina and finished fourth overall to put them in a good place ahead of racing on 15 July.

The Brazilians make a return to the Sail First ISAF Youth Worlds having finished 22nd in 2012 and are hoping for an improved performance, “My expectations? I don’t know… It’s difficult because we don’t have other 29ers to train here but I would like to finish in the top half better.

“I loved the Youth Worlds last year and I am really looking forward to doing it all again this year.”

With highs of 33 degrees forecast the climate is considerably different to what Dublin Bay, Ireland had to offer last year and Aranha is looking forward to that, “We are pleased with the weather in Cyprus because I think it is like what we have here in Brazil.”

Also returning to stake a claim for the medals will be Quinn Wilson and Dane Wilson (USA), Great Britain’s Benjamin Batten who moves to crew with Mimi El-Khazinder as helm, Poland’s Konrad Lipski and Michal Zak as well as Ireland’s Sean and Tadgh Donnelly.

The Sail First ISAF Youth Worlds will be Australian multihull sailor Paul Darmanin’s last Youth Worlds after he first made a winning appearance at Istanbul 2010.

Darmanin won gold as crew with Chase Lurati in 2010 before a tenth at Zadar 2011 as helm with Alexander Vucic. After the selection of the mixed multihull event for the Rio 2016 Olympic Sailing Competition Darmanin teamed up with Lucy Copeland for Dublin 2012 and the duo marked it by winning silver. Now, in 2013, they are hoping to take one step up on the podium.

“We know what to expect and we know how good it feels to win a medal, ” said Darmanin. “I think it will make us both hungry to go one better this year so we can get the same awesome satisfaction. For myself it is my fourth and last Youth Worlds, I would like to round off the Youth Worlds saga the same way it started in Turkey. Fingers crossed.

“We’re feeling excited and well prepared for the Youth Worlds, ” added the Australian. “We’ve been training hard on a Viper F16, a high performance catamaran that has allowed us to greatly excel relative to the training on the Hobie 16.”

Whilst their short term aim is clear, their longer-term aim is even clearer, “Lucy and I have a Nacra 17 coming that should be in Australia shortly after we get back. We are really excited to jump on this new Olympic catamaran and sail against Lisa [Darmanin, Paul’s older sister] and Jason [Waterhouse]. Our first regatta will be in Melbourne.”

Darmanin and Copeland recently came through in ninth at the SL16 Worlds in France whilst Great Britain’s James Henson and Olivier Greber were the only Youth Worlds sailors to medal, giving them an edge over their competitors before racing commences on 15 July.

On their silver medal Greber said, “It’s a great confidence boost for definite beating all the other boats who we will be competing against at the ISAF Youth Worlds. The Kiwi boat had a good week and seem to be improving very fast so they maybe someone to watch out for in Cyprus, but we are definitely happy with where we are at now.”

Henson added, “This week has been good for us and we’re now very confident heading to Cyprus with the aim of bringing back a medal –hopefully gold.”

Belgium’s Henri Demesmaeker ventures into his second ISAF Youth Worlds, which is quite something for a 12-year-old multihull sailor. The Belgian was the surprise package at the 2012 edition and was unlucky to miss out on a podium finish as just two points separated Demesmaeker and Philip Hendrickx and Brazil’s Martin Lowy and Kim Andrade.

Demesmaeker will make his return with Emilie Victor in 2013.

Brazil’s Lowy has moved from the multihull to the Radial Boys fleet which has seen Andrade take the Brazilian helm allowing Antonio Carlos Lopes Neto to make his first ISAF Youth Worlds appearance.

Lowy and Andrade shared a successful partnership that resulted in gold at the 2011 ISAF Youth Worlds and a bronze in 2012 and now Andrade has an opportunity to prove himself as helm in the new Brazilian combination.

American sailor Sam Armington makes a return with new skipper Ravi Parent, “It’s really exciting to be able to compete again, ” said Armington, who finished eigth in 2012 with skipper Jeremy Herrin. “2012 was an awesome experience and I met a bunch of great sailors and coaches.

“I know what it takes to do well and what to expect at the Worlds, ” he said. “This puts a bit of pressure on us, but it’s an advantage. I can help Ravi and help us prepare.”