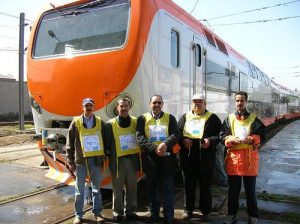 11 July 2013 – Two union representatives have been arrested and others injured following a police attack on a peaceful protest in Morocco on Monday 8 July.

ITF affiliate the Union des Syndicats UMT des Transports (UMT) reports that those injured were employees of City Bus in Fes, and had been protesting the deterioration in working conditions at the company. Workers, their wives and children are believed to have been among those attacked. The two arrested are Aziz Bonar and Ahmad Naser of UMT.

The attack by police is just the latest in a catalogue of anti-union measures. In recent months there have been several reports of refusal to recognise the union, strike-breaking, and the use of police to remove striking workers.

ITF acting general secretary Stephen Cotton said: “The attack on workers and their families, exercising their right to peaceful protest, is a matter of grave concern to us. Taken together with the anti-union measures previously deployed against workers, the matter becomes even more disturbing. We stand by the UMT in calling on the Moroccan government to release those arrested, reinstate all dismissed workers, and to respect the right of freedom of association as enshrined in the conventions of the International Labour Organization. I will be writing to the government to demand urgent action.”

The ITF wrote to express its concern to the government of Morocco on 3 June 2013. The letter still hasn’t been answered.

To add your voice in calling for justice for the workers in Fes, viewers can visit ITF’s solidarity page.