Perdomo overcame a tense finish to pick up the Laser Radial Boys gold whilst Lucas Rual and Emile Amoros (FRA) ended their regatta in style by recording their sixth race win.

Brazil’s Brito and Kneipp took the 420 Boys title after the RS:X Girls, RS:X Boys, Laser Radial Girls, SL16 and 420 Girls honours had been decided on the penultimate day. 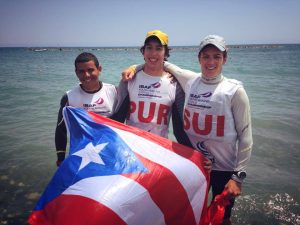 The ISAF Nations Trophy was won by the Italian team who displayed strong results across all eight events throughout the week. They finished nine points clear of Australia with New Zealand in third.

Juan Perdomo (PUR) and Joel Rodriguez (ESP) duelled in the final Laser Radial Boys race as Rodriguez looked to overturn a 16 point deficit. Perdomo held an OCS to his name with Rodriguez discarding a tenth so anything could have happened.

“It was very intense, ” said Perdomo. “It was really close at the end because Joel match raced me at the start and then it got really tense and when I crossed the finish line I wasn’t sure if I won.

“I heard Hugh [Styles, World Youth Sailing Trust Coach] say I was 23rd and then it really kicked in that I had won and it’s a really great feeling.”

Rodriguez’s efforts at the start meant he came down in 40th in the final race resulting in Perdomo finishing three points clear of the Spaniard to claim Puerto Rico’s first ever ISAF Youth Worlds medal.

“I’m ecstatic, there’s so many years of work and then you finally get the results it’s the best feeling ever, it’s great.

“There’s so many emotions going through my mind – it’s great to be here and I’m so happy it finished this way. I’m really, really excited.

“This is the first time Puerto Rico have won a medal at the ISAF Youth Worlds which is huge and it’s a gold medal, and it’s me and it’s great. It’s so special and I’m so excited for tonight.”

Lucas Rual and Emile Amoros (FRA) had a strong lead coming into the final day of 29er racing and needed to get round in 19th or better to secure gold.

They resisted the urge to end the week conservatively and did it in style by taking the final bullet to finish a massive 33 points ahead of Ida Svensson and Rasmus Rosengren (SWE) who took silver. Markus Somerville and Jack Simpson (NZL) were two points behind the Swedes and take bronze.

“This is just amazing, ” said the French duo. “It was our main goal and we managed to do it so it cannot be better.”

A joyous French contingent waited on shore to greet their team and Amoros added, “The French team is really close and it’s so amazing to see them on the beach waiting for us and it’s really awesome. It’s been a great week.

“We didn’t want to take risks but wanted to give all we had again and we managed to win the last race, we were looking behind us at all the spinnakers for the last time and it was beautiful.”

Brazil’s Brito and Kneipp took the final gold medal to be decided in Cyprus in the 420 Boys event and were pleased with their accomplishment, “This is the first time a Brazilian has won a gold medal in the double-handed boys, ” said Brito. “We trained really hard before and we are very happy and emotional.”

The pair had a seven point lead coming into the final and despite discarding their 21st they picked up on the last day they won by two points.

Carrie Smith and Ella Clark (AUS) were prepared for a last day fight for the gold after coming off the water on the penultimate day but after Italy’s Ilaria Paternoster and Benedetta di Salle received a non-excludable discard from Race 10 the Aussies had the job done could enjoy the final day on the water.

“We’re pretty excited, ” said Smith, “It’s been a long time in the making and this regatta has just been perfect and we’ve really enjoyed it.”

Clark added, “It’s been a really good regatta for us. This was our third and final shot at this regatta and to come out as World Champions, especially with a race to spare, we’re stoked.”

In recent years it has become a tradition for the Australian Youth World team to lift their golden sailors off the water and Smith and Clark were head and shoulders above the rest, “We saw it with Mark [Spearman] last year and didn’t think they could do it with a 420 and with us on it but it was awesome and a great feeling.”

The Italians dropped to fourth overnight so had some work to do on the final day to pick up a podium spot. They worked hard winning the final race and the results went their way as they picked up bronze. Silver went to Chile’s Nadja Horwitz and Carmina Malsh.

It was a job well done on the penultimate day for New Zealand’s Isaac McHardie and Micah Wilkinson and Australia’s Paul Darmanin and Lucy Copeland who had gold and silver in the bag in the SL16 event but the race was on between James Henson and Oliver Greber (GBR) and Kim Andrade and Antonio Carlos Lopes Neto (BRA) for bronze. The pair stuck to each other like glue around the race course and on the final run the Brits overtook the Brazilians and subsequently the final podium spot went to the Brits.

China’s Lu Yunxiu had gold in the bag before the final RS:X Girls race but taking the final podium spots are Italy’s Marta Maggetti and the Netherlands Sara Wennekes.

Marion Lepert (USA) fought hard to move up into the final spot but was one point shy of Wennekes in fourth.

Like Yunxiu, Kieran Martin (GBR) had an unassailable lead heading into the final day of the RS:X Boys competition. Oleksandr Tugaryev (UKR) sat comfortably in second with the race for third the one to watch on the last day of sailing in Limassol.

Ignacio Berenguer (MEX) needed to put four spots between him and Radoslaw Furmanski (POL) to move into the final podium spot but could ultimately only put one as the Polish sailor took bronze.

Line Flem Host (NOR) finished 43 points clear in the Laser Radial Girls and ended her week with a last race bullet. Agata Barwinska (POL) and Monika Mikkola (FIN) jostled for the silver and bronze medal but they stayed in second and third respectively.