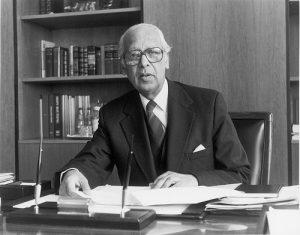 IMO Secretary-General Koji Sekimizu expressed his sincere condolences to the Indian Government and Dr. C.P. Srivastava’s remaining family,  and also the condolences of the entire IMO membership and staff.

”It is with great sadness that we have learned of the passing of Dr. C.P. Srivastava, the longest-serving Secretary-General of the Organization, ” Mr. Sekimizu said. ”Dr. C.P. Srivastava was a truly great Secretary-General who established the World Maritime University and placed IMO’s work on technical co-operation in a central position in the work of the Organization, in order to promote the implementation of IMO conventions on a  truly global scale.”

Mr. Sekimizu added: “I met C.P. in Tokyo In 1981 and I was inspired by him to explore my career in the Japanese Government in the field of international co-operation dealing with shipping and I was really fortunate to have been recruited by him as an officer of IMO in 1989. I have been contacting him this year and I was pleased to deliver his congratulatory messages on his behalf at the Commemorative Event, held at IMO headquarters to celebrate 30 years of the University, on 10th July. The last time I spoke to him was when I telephoned him just after the WMU 30th celebration reception, to immediately report to him about the successful holding of the event. He was delighted with the information that the event was successful and he was pleased with the current state of developments at the University,   strengthening its activities with the vision established by him 30 years’ ago.”

During Dr. Srivastava’s tenure as Secretary-General, from 1974 until his retirement on             31 December 1989, IMO increased its membership considerably. Dr. Srivastava was well known for his relentless efforts to make IMO known to the developing world and for encouraging developing countries to join the “rich men’s club”, as IMO was often referred to at the time. This shaped the structure of the Organization’s membership to its present status, whereby two-thirds of the 170-strong membership (and three Associate Members) is represented by developing countries, making a significant contribution to IMO.

During his tenure, a comprehensive, pragmatic and co-ordinated programme of technical co-operation was conceived and developed and effective steps were taken to promote its continuing implementation.

Dr. Srivastava will be remembered for his visionary and pioneering role and his ceaseless efforts in the establishment of IMO’s global educational institutions, including the World Maritime University (WMU),   in  Malmö, Sweden, and the International Maritime Law Institute (IMLI), in Malta.

Earlier this month,  Dr. Srivastava had sent a message of support to be read out during celebrations marking the 30th anniversary of the founding of WMU, which were held at IMO Headquarters in London. Reading out his message, IMO Secretary-General Koji Sekimizu described him as the ”founding father” of WMU, which has become IMO’s centre of excellence for postgraduate maritime education.

C.P. Srivastava was born on 8 July 1920 and was educated in Lucknow, India (obtaining BA, MA and LLB degrees).

He started his career as a civil servant in the Indian Administrative Service in India, serving as the district administrator in Meerut and Lucknow, and then went on to the post of Joint Secretary to the Indian Prime Minister’s office of the late Lal Bahadur Shastri from 1964 to1966.

Early in his career, he found his forte in the field of seafarers training and welfare. During 1947 to 1948, he was the prime mover in the establishment of a network of new maritime training institutions, which have since produced world class maritime personnel, greatly facilitating the growth of Indian shipping in the years following Independence.

After a stint at the Directorate General of Shipping, he was appointed as the Founder Chief Executive of the Shipping Corporation of India, a Government of India enterprise, which he built up to the largest shipping company of India and one of the biggest and most successful shipping companies of the world, with a diversified fleet of cargo liners, tankers, bulk carriers and passenger ships. For his exceptionally outstanding work as Chairman & Managing Director of the Shipping Corporation of India, he received the Padma Bhusan (one of the highest civilian awards in the Republic of India) in 1972 in recognition of his contributions to establishing one of the most successful public sector undertakings in India.

Dr. C.P. Srivastava become the first chief executive of the Shipping Corporation of India and In 1974 he was elected to serve as the Secretary-General of the International Maritime Organization (IMO), and was re-elected unanimously for three successive four-year terms, serving until his retirement in 1989.

As Secretary-General of IMO, Dr. C.P. Srivastava recognized the crucial importance of the human element in ensuring safety and efficiency in international shipping  and played a pioneering role in the establishment of the International Maritime Academy in Italy, and the International Maritime Law Institute in Malta. He was the founding father and also the first Chancellor of World Maritime University which was founded in 1983 to address a pressing need for trained maritime professionals in the developing world. He was the inspired prime mover in the development of the concept of World Maritime University and IMLI, and in the immense job of planning, negotiating, fundraising, organizing and implementation that was required to take a vision and turn it into a reality.

In 1987 he was named an honorary graduate by the University of Wales.

Just before his retirement from his post as IMO Secretary-General in 1989, the IMO Assembly, meeting for its 16th session, unanimously adopted a resolution (A.679(16)), noting his retirement with regret and recording his services to IMO Member States. The resolution noted that, throughout his tenure, which comprised four successive terms and lasted 16 years, Dr. Srivastava rendered exceptionally meritorious services to the Organization with total commitment to its ideals and objectives.

As a result of his leadership, integrity, dedicated endeavour and initiative, it said, the membership of the Organization stood greatly enhanced and its universality well established; many conventions and protocols had received wide acceptance and were now in force, promoting the objectives for the Organization of safer shipping and cleaner oceans and the IMO spirit of goodwill and co-operation has been sustained and enhanced.

It was during Dr. Srivastava’s tenure that a comprehensive, pragmatic and co-ordinated programme of technical co-operation was conceived and developed and effective steps were taken to promote its continuing implementation.

The resolution went on to recognise the visionary and pioneering role of Mr Srivastava, and his ceaseless efforts in the establishment of IMO’s educational institutions, including the World Maritime University and the International Maritime Law Institute.

In 1990, in recognition of his service and contribution to world shipping, Dr. C. P. Srivastava was conferred, by Queen Elizabeth II of the United kingdom, the title of Honorary Knight Commander of the Most Distinguished Order of Saint Michael and Saint George (KCMG).

In 1991, he received the International Maritime prize from the IMO for his contribution to their work and objectives.

Dr. C.P. Srivastava was married to Nirmala Srivastava, the founder of Sahaja Yoga, a unique method of meditation, based on an experience called self-realization. Dr.C. P. Srivastava has stated that his life has been greatly influenced by his wife and he has been motivated by her vision of one Almighty God and one human family. This vision motivated him in all aspects of his life.

He is survived by two daughters.