2:00pm: race one started two hours after the scheduled start. The sea breeze finally came in and the race was sailed in eight knots from the southeast. Pressure was strongest to the left of the racecourse but a wind shift to the right was expected later on. Sodebo picked the left and that worked out well: they won ahead of TPM-Coych and Groupama 34, leader overall. 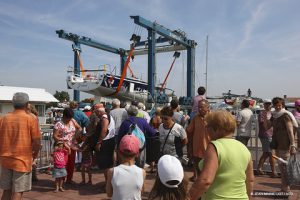 3:25pm: race two started in a lighter wind and the Omani team did the best out of it. The right side of the racecourse paid off this time and Team OmanSail won ahead of Bretagne Crédit Mutuel Elite and Courrier Dunkerque 3.

4:48pm: race three started in four knots of wind, dropping to two… The race was shortened and the finish line moored after the first downwind tack. The Swiss team Ville de Genève Carrefour AddictionS won their first race so far ahead of Groupama 34 and Sodebo.

The overall ranking does not move overall after today’s racing but Sodebo, fourth, is getting closer from Courrier Dunkerque, third. All sailors are now resting and taking care of their sunburns before sailing tomorrow’s in-port races (first start at 11:00am) and the evening’s offshore leg to La-Seyne-sur-Mer (start at 6:00pm).

Antoine Frickey, Sodebo skipper:
“We went to the left at the start and we led the first race all along. It went on like a dream! Race two was much more shifty and we paid for a bad choice. Wind was very light during race three but it wasn’t that bad apart for the last downwind tack. There we saw Courrier Dunkerque loosing it all after a good start. It happened to us before and that’s always tough.”

Aymeric Chapellier, Team Omansail tactician:
“Our first race wasn’t great, we won the second and didn’t take a great start in the third one. The racecourse was very unequal. It wasn’t easy because of the heat and the continuous possibilities. It’s a team victory and it’s really nice to sail with this group.”

Laurane Mettraux, Ville de Genève Carrefour AddictionS bowman:
“We were looking forward to win a race and it feels good. We took a great start on race three, we went to the good side and we didn’t manoeuvre much. We led at the first mark and managed to control Groupama 34.”

Nicolas Troussel, Bretagne Crédit Mutuel Elite skipper:
“We are trying to sail our own race. We’ve got to be careful with our competitors but we don’t want to fall into the “control trap” neither. The team did well today; we’ve done great.”