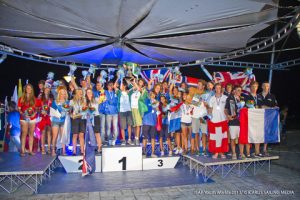 Over 350 sailors from 61 nations flew their national flag across eight youth events and at the closing ceremony on 19 July they gathered with coaches, volunteers, family and friends to celebrate their own personal successes and accomplishments.

Held at the Cyprus Sailing Federation the first award of the night awarded was the Bengt Julin Trophy.

The ISAF Bengt Julin Trophy is a unique trophy which is awarded to a competitor or a National Team that has done the most to foster understanding and displaying attributes that are encouraged at the ISAF Youth Worlds.

Voted for by the sailors the award went to Germany’s Nik Willim who had demonstrated good sportsmanship, respect, graciousness, helpfulness and friendliness to his fellow competitors. 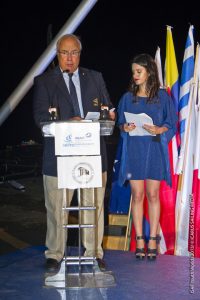 Alongside the medal presentations event sponsors and over 250 volunteers were thanked for their support before, during and after the event.

Italy received the ISAF Nations Trophy, the second time they have picked up the most prestigious youth trophy after first receiving it at the 2006 edition in Weymouth, Great Britain.

ISAF Vice-President George Andreadis closed the event as sailors from the Cypriot team passed the flag to the Portuguese team with Tavira, Portugal set to host will host the 2014 ISAF Youth Worlds. 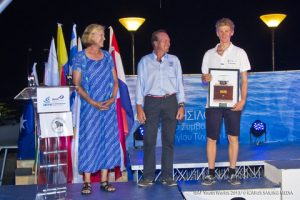