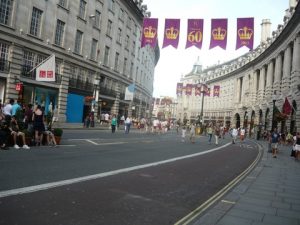 Tuesday 23 July 2013 – As Britain welcomes the birth of a new royal heir, we take a fascinating journey through Lloyd’s archives and uncover the market’s long history of insuring risks associated with Royalty – including a policy insuring against Queen Victoria having twins.

In the course of delving into Lloyd’s archives to research its links with Royalty, Lloyd’s curator Alan Brown revealed the so-called Blue Book. It records unusual insurances said to have been underwritten at Lloyd’s, including several relating to Royalty.

The Blue Book was compiled by J M Machie, the Superintendent of the Room at Lloyd’s between 1920-1931 through access to insurance policies and his contact with brokers and underwriters in the market. The book has never been published, all information therein should be consumed with a degree of caution, however its contents make for a fascinating insight into Lloyd’s at that time.

The coronation of George V, the grandson of Queen Victoria who reigned from 1910-1936, was a lavish affair at the zenith of the British Empire. Celebrations took place across the Empire, while in London the streets thronged with a patriotic British public eager to watch the coronation procession.

According to the Blue Book, large amounts of insurance were purchased from Lloyd’s underwriters by owners of property or sites along the procession route. The insurance covered the risk of postponement or any change in route, covering individuals for the loss of revenue from selling seats and stalls.

The Silver Jubilee of George V in 1935 was also said to have given rise to much insurance at Lloyd’s. Policies covered cancellation of the celebrations due to rain and legal liabilities from the collapse of stands and accidents.

Going even further back, in the year of Queen Victoria’s Diamond Jubilee in 1897 Lloyd’s underwriters insured the jewels of an Indian Maharajah for £200, 000 and also a charitable scheme supported by the then Prince of Wales Edward VII. The policy eventually paid a claim of £16, 000 when the scheme to sell £50, 000 “hospital stamps” failed to reach expectations after postal authorities refused to postmark the unofficial stamps, therefore making them less attractive to collectors.

Queen Victoria was also the subject of a policy written by “Dicky Thornton” (1776 – 1865) who the blue book describes as “one of the liveliest sparks ever to write risk at Lloyd’s”. Thornton is believed to have insured against the risk of Queen Victoria having twins at her first child bearing. The identity of the policyholder is not revealed.

The 1936 coronation of the then unmarried Edward VIII caused some businesses to enquire at Lloyd’s about possible insurance. A Lloyd’s underwriting member, Colonel Sandeman, told the House of Commons that insurance had been sought against the marriage of Edward in the run up to his coronation. A well-known manufacturer of mugs wanted to insure against the cost of manufacturing commemorative coronation mugs with the two heads rather than the one. If a marriage took place before the coronation two portraits would be necessary on the mugs instead of one. And this would mean that all the expenditure would be wasted. Of course there was a wedding but no coronation.

Edward VIII, later the Duke of Windsor, only reigned from 20 January to 11 December 1936 after he was forced to abdicate. Shortly after his coronation Edward proposed to American divorcee Wallis Simpson, a union that conflicted with his role as the head of the Church of England. It is not recorded if the claim was paid.

End of an era

The death of a much loved monarch can instigate a long period of mourning. In the early Twentieth Century it was also a major blow to commerce and purchasing insurance against such risks was once common place.

UK insurers were said to have paid out several millions of pounds upon the death of Edward VII, who gave his name to the fast changing times of the Edwardian era. Towards the end of his life in 1910, Edward VII was in poor health, leading a number of interested parties to take out insurance against his death.

The New York Times, May 8, 1910, tells of a last minute dash to Lloyd’s by one dry goods merchant to buy cover for his stock over fears of the Kings imminent demise. The newspaper said the drapery industry was particularly affected because large stocks of coloured summer cloth would go unwanted in the long period of mourning. Much of the loss to the trade was said to have been covered by insurance.

The New York Times noted that almost all insurers and Lloyd’s underwriters had to pay claims, including those for the large number of events cancelled as a result of the King’s death on May 6. Other losses insured against included a fall in the value of stocks and shares and the transfer of Duchy lands and official incomes.

Lloyd’s underwriters said losses were no larger than those frequently sustained in the course of ordinary business. One told the New York Times that the total risk at Lloyd’s related to the King’s passing was no greater than the insurance of a large ship.

The Blue book outlines a series of insurance policies connected to Kaiser Wilhelm II.A grandson of Queen Victoria and one-time frequent visitor to the UK.

During the war Lloyd’s insured buildings against Zeppelin airship and airplane bombing raids on London. The first Wilhelm policy is cover for during the week of the Kaiser’s birthday (Jan 27th) as it was feared raids might be used to celebrate the wedding.

After Germany’s defeat, Wilhelm fled to exile in Germany and Lloyd’s was asked by US policyholders to provide insurance to cover the risk that the Kaiser could return to the throne in Germany. An American forecaster had predicted that Wilhelm would return to power in November 1925.

Lloyd’s underwriters provided thousands of pounds of cover through the so-called Kaiser Wilhelm policies (apparently there was a policy on display in the old Lloyd’s Library, so it may be in the archive.) Lloyd’s also holds a signed letter from the Kaiser acknowledging the bestowal of the Lloyd’s Silver Medal upon the Captain and members of the crew of the German liner Bulgaria for saving that vessel in rough weather in 1899.

Machie wrote in the Blue book that the purpose of his collection of “Strange Insurances” is to familiarise readers with the little known uses to which insurance can be put in the everyday affairs of life.

However the editors of lloyds.com would like to repeat Machies warning to readers: “It cannot be emphasised too strongly that the Committee of Lloyd’s do not regard with favour any risks which might come under the heading of “Freak Insurances”, as they convey a wrong impression of what the main and extensive business of Lloyd’s chiefly consists.

“Also that the principle of insurance is utterly opposed to that of gambling, since the former aims merely at protection, whilst the latter has solely in view the speedy acquisition of gain.”