Top Posts
Don’t take chances where your health is concerned…
How Greek shipping can cut costs and improve...
GLOBAL & REGIONAL DAILY (Thursday 13 May, 2021)
RMT calls for action to protect seafarers’ mental...
Poseidonion Grand Hotel welcomes you back on May...
Large Diameter Drilling to partner with DEME Offshore...
Cyprus Ship Management Round Table Webinar and Debate
Lady Moura up for sale… plus more
Will the dollar decline? The changing landscape of...
TSUNEISHI SHIPBUILDING collects actual operation data by IoS-OP
Deltamarin is proud to be a part of...
Home OrganisationsEuropean Union Greek Shipping, unsolicited support, as always, the Motherland!
European UnionLabour DisputesMaritime Education and TrainingNewsPolitics and GovernmentShipbuilding and Shipyards

The following are the main points from the latest John Faraclas live interview to Niki Lymperakis of SBC TV last Friday, the 19th of July 2013; please click below, listen and comment:

Niki Lymperakis entered the interview with the major story, that of the unsolicited contribution of Greek Shipping to assist the Greek budget over the next three years with twice as much as in previous years, based on the tonnage tax.

Faraclas explained in full the issue both historically and pragmatically.

Other matters were the downward freight market with the Baltic Dry Index falling from 1, 149 to 1, 138 points and Faraclas’s persistence  to support the island of Spetses – and other Greek islands – for the benefit of all.

The above and other matters you can listen in Greek on the audio clip above with the English translation below; enjoy it! 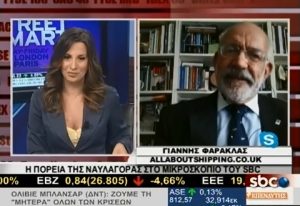 Niki Lymperakis (NL): We will be talking about shipping next, we are connecting via Skype with Mr John Faraclas, from allaboutshipping.co.uk.  Good afternoon Mr Faraclas, I will mention that you are finally on Greek soil.

John Faraclas (JF): Good afternoon, good to be here, indeed I am on the island of Spetses, amidst the memories of Spetsiot sea-fighters, I never forget the Anargyrios College and everything else about Spetses.

NL: I see.  Thank you very much for your time, as I am sure there are much better things to do in Spetses.  If you don’t mind, let’s listen to a clip from yesterday’s meeting of the Union of Greek Shipowners  with the prime minister, during which they agreed to a voluntary tax increase.  We’ll watch part of the discussion between Mr Samaras and Mr Veniamis, the president of the union, and we’ll come back to discuss it.

Mr Samaras, Greece’s prime minister: Today’s agreement about your voluntary participation to the state budget of 90% of the fleet under Greek flag and 65% of the fleet under foreign flags is moving and proves that during the nation’s difficult periods, shipping, as a national champion also, has been a force for the good of the nation.  The effort by the Greek people is very hard, but together we will make it.  I want to thank you again, as I know that today is a special day, both for shipping and for us.

Mr Veniamis, president of the Union of Greek Shipowners: This effort was successful because everyone showed their support for the nation, as you also support our sector and I think that they confirmed that the shipping community has been and always will be responsive to whatever Greece asks from us.

NL: Well, this was the prime minister and Mr Veniamis, the head of the Greek shipowners union.  Mr Faraclas, surely you know about this, Mr Samaras talked about the great response of Greek shipowners.  I would like to hear your comments about this decision according to which shipowners will pay double the tax, as defined by vessel capacity, or tonnage, for a period of three years.

JF: I would like to clarify that this tax only concerns management companies that are based in Greece, so some of them may end up not paying it.  Greek shipping has always been a supporter of the Greek state, as has been in the last 10, 000 years.  In all these periods, Greek shipping, as you know from Plato’s Republic, the nafkleros  always gives himself in support of his country.  “Nothing helps but the ship, ” as the old saying goes.  Let’s emphasize this.  So, Greek shipping, comes unsolicited to support the nation in its hour of need.  And I am sure that my compatriot, Theodore Veniamis, and everyone else in the union are doing their best to get our country out of its problems, whatever this entails and their contribution has been huge.

NL: Mr Faraclas, allow me to mention some questions, from all of us who are not in the shipping industry and I would like to hear your views.  A question that we always see in press, in public discourse or in the Greek parliament, is why increased taxation should be voluntary for shipowners.  I am asking because the counterargument is that none of us taxpayers was ever asked if he wanted to pay tax or not.  Please explain to us the justification for the voluntary nature of this for shipowners.

JF: Shipping has been misunderstood, nobody has explained to the Greek people what the model of global shipping is.  This is the first thing.  The second is that the taxation issue has also not been explained to the people and everyone believes that all the world’s shipowners pay taxes that are proportional to their expenses.  This is a big mistake.  Don’t forget that foreign countries, particularly the Anglosaxon ones, have introduced tax havens and as you probably saw from yesterday’s front page of Lloyd’s List, there has been large scrutiny on all shipping tax havens.  Even the United States, that always talk about this issue, have on their territory, and you as a law graduate must know, have the Delaware corporations, which are exempt from the taxation of other states.

NL: So you are saying that shipowners are not really paying taxes, this is what happens abroad as well.

JF: If you calculate the tax that would correspond to them, they won’t pay it, as there are no cargoes destined for  Greece, they don’t transport cargoes on Greek territory.  There are Greek ships that have never ever docked at a Greek port.  You see?

JF: This is very important.  So the ships move around the globe.  We transport the cargoes because we are the best and most honest carriers of the world’s cargoes.  So if the taxation…

JF: If taxation is imposed, there will be a point where the shipowner will pay more than he receives.  Tax brackets will be a mathematical paradox.

NL: Pardon me, I cannot conceive how taxation will ever exceed the shipowners’ profits.  Here we are following…

JF: From 25-30 million, it will reach 140 million.  This is unheard of.  They are not obligated, as patriotic as they may be, none of them is a charity institution, let’s be realistic.  However, in all history, as I said, in the last 10, 000 years and more recently, in the last 100 years, they are the people that have supported our national economy in many different ways.  From offering employment, don’t forget what happened in Greece in the 1940’s, let’s emphasize this, to the improvement of relations among the two sides of the Greek civil war, all this came as a result of people finding employment in shipping.  If one reads the book by Andreas Lemos, one of the forerunners of Greek merchant shipping, titled “A 20th Century Traveller Recites, ” he will see the contribution of the Greek shipowner, to fund, to build roads, airports, everything on all Greek islands.  I am a Chiot and I know very well the contribution of shipping not only to Chios but elsewhere as well.

NL: I would like your comment on another issue now.  There is, as you know better than I do, a concern in the European Union, we have seen the Commission since October or December of 2012 request an explanation of the tonnage-based, or capacity-based taxation by the Greek state.  Our reports say that behind this investigation by the Commission, and despite its denial, are other countries’ business interests which see a decline in employment by the incentives given to Greece.  I think you will agree so far.  The question is…

JF: Let’s discuss this point.  The Europeans have always been enemies of Greek shipping.  They also introduced tax havens, where every dependency  of Britain had its own tax policy.  Malta was a British dependency, the Isles of Man etc.  No Greek shipowners not even the Greek State ever asked or demanded for a Greek island to become a second registry.

NL: Mr Faraclas, if you’ll allow me, as we are running out of time, I would like to state my question and ask you for a short answer.  The question is if this favorable tax regime in Greece — we must admit it is favorable comparatively, as you also said this is also what happens internationally and we accept that — is an incentive  for Greek shipowners to return to the Greek territory.

JF: It is an incentive, but believe me, all Greek shipping is already at Piraeus.  Since Law 89/1967 onwards as well as Law 27/1975, they all came to Greece.  Greek shipping has been fought against since 1958.  Don’t forget that the British Treasury attacked the P&I Clubs, it was the fiasco of New York.  Greek shipping is in the Attica region, put it this way.  In London, there are only some shipbroking companies.  Wrapping up, our competitors have more incentives and tax breaks — if they can be considered competitors, Greek shipping really has no competition, no matter what they have done to us, being the top shipping power is an honor for Greek seafarers, where all this started and later the Greek shipowners.  We would like to return to the chartering markets, where we were proven right.  As you remember, last week I was negative about the markets and today there was a drop of the BDI to 1, 138, down 8 from yesterday, down 14 from the day before and down 11 from July 12th, when it was 1, 149 points.

NL: Mr Faraclas, thank you very much for your time.  I am afraid we have to end, but if you have time, before you leave Greece, we’ll be happy to discuss more here at our SBC studio.

JF: I am now at the island of Spetses, it must be supported by everyone.  The president of the Law Society of France chose it for his wedding and reception on a ferry boat, there have been other big events as well.  We must support the Greek islands.

NL: I second that, Mr Faraclas, unfortunately we have no more time, already exceeded it.  Have a good afternoon.

JF: Same to you, have a nice weekend.