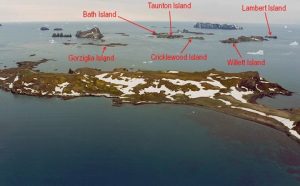 19 August 2013 – The latest islands to be named within British Antarctic Territory include titles which are linked to the United Kingdom Hydrographic Offices (UKHO) location and personnel.

The islands are part of the group of Aitcho (HO) Islands named after the Hydrographic Office in 1935. These lie between Table Island and Dee Island, English Strait and South Shetland Islands.

The citation says that Taunton Island was named after the location of the UKHO, where printing works have been since 1941 and the rest of the office has been located since 1968.

There is also a Cricklewood Island named after the pre-1968 location of the UKHO in Middlesex and Bath Island after the city where sections of the UKHO were temporarily located during WWII.

Lambert Island was named after the Admiral for his service as commanding officer of Royal Navy survey vessel HMS Endurance and for other significant contributions he made to furthering Antarctic science. He served as National Hydrographer from 2010 -2012.

Andy Willett, who has worked for the UKHO for 35 years, said he was honoured have an island bear his name for his work for the International Hydrographic Organisation (IHO).

Admiralty chart 1776 showing Livingstone Island to King George Island in Antarctica. The Aitcho Islands are located to the west of Robert Island

For the last 10 years he has chaired the Hydrographic Commission on Antarcticas Hydrography Priorities Working Group (HPWG), which is responsible for identifying charting and surveying requirements around the continent. The need for accurate and up to date navigational products is critical in this very remote area.

He said: I was very humbled when I received the official announcement from the Antarctic Place Names Committee and consider it a great privilege to have my work for the IHO recognised in this way.

Coincidently, at last years conference, the IHO approved a proposal from the HPWG to produce a large scale International chart of Aitcho Islands. This will improve navigational coverage of an area that is frequently visited by tourist vessels.
Also newly named amongst the six Aitcho Islands is Gorziglia Island which is titled after Captain Hugo Gorziglia, who chaired the IHOs Hydrographic Commission on Antarctica from 2002-2012.

The UK Antarctic Place-names Committee meets about twice a year to consider proposals for names for features such as mountains, islands and peninsulas within BAT and 17 place names have been made within the last six months. The names, which are usually proposed by scientists and others working in the area, are decided upon by a committee made up of representatives of the UKHO;the Government of British Antarctic Territory; British Antarctic Survey; Permanent Committee on Geographical Names; Royal Geographical Society; Scott Polar Research Institute and the University of Cambridge.

1. UKHO, an Executive Agency of the Ministry of Defence, has been charting the worlds oceans for more than 200 years with the primary aim of providing navigational products and services for the Royal Navy and merchant mariners to save and protect lives at sea. In addition it serves small craft and leisure mariners and provides a range of consultancy services.
2. UKHO also plays a central role, in support of the Maritime and Coastguard Agency, in discharging the navigation element of the UKs Safety of Life at Sea Treaty obligations for waters of UK national responsibility.
3. UKHO produces a worldwide series of some 3, 300 paper nautical charts, 160 publications under the Admiralty brand and Electronic Navigational Charts (ENCs). The ADMIRALTY portfolio is sold globally and used by nearly 70% of international shipping.

Waiting for something to turn up…