Waiting for something to turn up…

We live in interesting times; the world economy in a mess, the political and geopolitical environment too. The shipping industry on a downfall, but promising for those disciplined and bold to make the next major successful step through! We fear of  unprecedented events taking place and already some are evolving. We ask the view of the real experts in the industry to have their say.

1)  So, how the continuation of the downward trend of the markets (dry and wet) and the current world economic crisis affects the industry? And for how long?

There is no end in sight to the Maritime Industries depression.  The oversupply of ships continues and surprisingly, newbuilding orders are at least equivalent to the tonnage being scrapped. 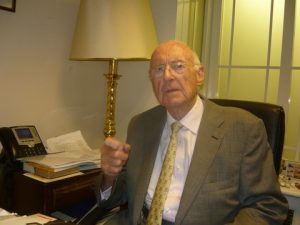 2) How one can stop overcapacity and in conjunction with demolition balances demand and supply for profitable shipping business? How one can stop the appeitte When should the oil prices drop? How will fracking affect then oil industry, conversely shipping?

The cooling of economic activity reportedly occurring in the Powerhouse Countries like China is momentarily worrying but I suspect will be short-lived – in terms of oversupply owners and banks are behaving Micawber like “waiting for something to turn up”.  There remains an understandable reluctance to face the obvious which could result in bankruptcies and extreme embarrassment for some banks.

‘Fracking’ could result in a diminution in tonnage-miles for tankers…. but these are early days.

3) How regulatory changes affect the industry, irrespective of good or bad markets? (in dry, wet, containers and specialist ships).

Regulation will always increase costs in shipping.  However “’elf and safety” is the mantra of today so inevitably maritime transport will be less cheap in the medium term.  Paradoxically more stringent regulation may assist in the supply: demand imbalance by forcibly removing older sub-standard ships. 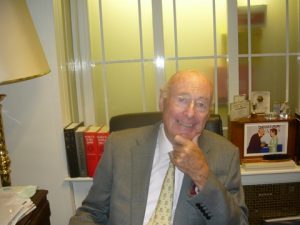 4) How the German stance affects Europe, the Euro and the world Economy? What will be the aftermath of the German elections?

Germany is unlikely to change its powerful economic position under any new administration.

5) Sanctions are in force and sanctions bite; sanctions should be imposed but what can be the counter effect? What about the sanctions on Iran? What should be the penalty for those breaking the sanctions?

I am hoping there could fairly soon be a reconciliation with Iran.  Stand – offs and sanctions are clumsy and usually ineffective long-term. 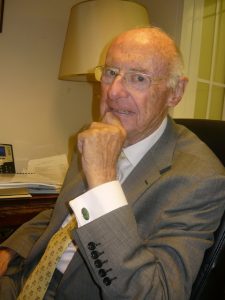 6) Shipfinance, a field you know more than well is going through a difficult and changing pace; in what form today and in the future funds should be available to finance the shipping operations? And what about the future of listed and non listed shipping companies?

The overenthusiastic bank lending to shipping is thankfully behind us.  In whatever activity funds will always be available for a properly constructed deal and it is right that the casino-like behaviour of the 80’s no longer obtains.  In truth there should be no significant difference between listed and non-listed companies except that the latter can be more sporty and risk taking but only if they are putting their own money on the line (i.e. NOT borrowed money)

7)  From the point of view of the IOE, where you are the President, how do you view the balance of trade and the world economy? What’s the best ingredient for British exports?

On the other hand the huge growth in World Population has one positive merit in that Demand for all products, bulk and manufacture is increasing.  British exports depend on inventiveness, quality and delivery.  The apparent decline in manufacturing e.g. of British cars has in fact been balanced by plants being set up in the UK by overseas giants such as Toyota and Honda.  It is very important for our export trade that the current better relationships with the unions be maintained.  The bad old days of stupidly-motivated strikes must never return. 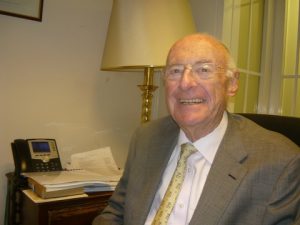 8) Given the world-wide fraud by government officials, public servants and politicians, who should stand as a politician? What should be his/her credentials?  What is the best electoral system?

I prefer not to over- meddle in Politics other than to observe that “Democracy/ one man/one vote” is a very expensive system unless both management and workers exhibit a realistic tolerance and understanding of each other.

As I say I know of no better system.  A decidedly more efficient one would be dictatorship but we have had enough of that for this century.

Regarding ‘Fraud and Corruption’ there is the maxim “Man is born to trouble as the sparks fly upward”.  Both will always be with us but the law must be courageously and firmly enforced.

9) Isn’t time we stop piracy here and now? And what about terrorism? What is the stumbling block? Who should be an armed guard? Who should licence the companies running maritime security?

Piracy must be stopped and also of course terrorism.  The only ultimate solution to both lies with the United Nations.  Meanwhile like-minded nations must protect their own.

10) How best in this ever changing world we can protect the environment? And what about the effect of natural disasters?

Awareness of the need to protect the environment is growing.

Three priorities for IMO should be

c) The promotion of a Global as opposed to National Overview of the need to protect our crowded planet.

11) Women are becoming a driving force in all aspects of our industry; how best we can use their up and coming advantages?

Women are becoming more and more involved in all industries, let alone Shipping, and the World will be better for it.  Any barriers should be eliminated.

12)  What should be IMO’s next three priorities?

Once again IMO should take the initiative to co-ordinate the already excellent training in some countries and encourage establishment and excellence in the “new” participating countries. 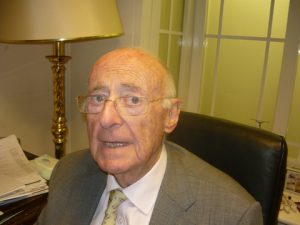 13) Now on the cruise industry, an industry you also know more than well: how same will flourish in this deteriorating world economic climate? Will mega ships survive? What is the optimum size?

Cruising the “Holiday with Everything” (a slogan invented some 40 years ago by my team at P&O) is growing exponentially and will continue to do so.  Mega ships are the most profitable for owners because their “fixed costs” are surprisingly not much more than those of smaller ships.

The market is however not homogenous.  There is room for expensive smaller ships of all grades wooing their explicit socio-economic publics, alongside the mass market leviathans.

Thus there is no “optimum” size other than that the biggest ships are the most profitable.

14) What is the role of classification societies?

Quite simply maintenance of Standards in the hardware of shipping.

15)  The London International Shipping week is less than a month away; what do you expect to be the result following all these programmed events?

The week will focus attention for a period.  One hopes it may continue long term.

* Jim Davis has been actively involved in many areas of the International Maritime Industries for a period that now expands over sixty years! His career has included being a Director of P&O Lines, Director of Shipping with Kleinwort Benson Merchant Bankers and various Chairmanships such as DFDS Limited, Midway Shipping and Wigham Richardson shipbrokers. Directorships have included Pearl Cruises of Scandinavia, Rodskog Shipbrokers of Hong-Kong and Global Ocean Carriers, part of Tsakos Group.

** IMIF is a unique organisation comprising of high profile representatives from quite literary all parts of the maritime industries. These include shipowners, shipbuilders, ship recyclers, shipmanagers, shipbrokers, insurers, underwriters, P&I Clubs, classification societies, regulators, maritime lawyers, shipping accountants, shipping bankers and financiers, surveyors, salvage experts, trade unions and a host of ancillary organisations that share IMIF’s commitment to the promotion and economic well-being of the maritime industries. As a forum IMIF led the way and indeed leads the way in discussing and debating any subject of relevance to the well-being of the maritime industries. For nearly twenty years members have hosted a series of buffet luncheons for the benefit of the other members to which guest speakers renowned for their expertise have been invited to talk on a variety of subjects.

Another milestone for Laskaridis