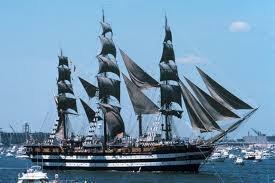 Hail to Amerigo Vespucci – the great navigator whose name is borne by two continents and by one of the world’s most beautiful ships,  By James Brewer

It could hardly have been a more fitting visit. The Italian navy’s magnificent sail training ship Amerigo Vespucci  berthed for an official five-day call at South Quay in London’s docklands just over 500 years after the death of the incomparable navigator Amerigo Vespucci, The occasion proved an ideal opportunity to reassess the legacy of the 16th century navigator whose pioneering voyages changed the perceived shape of continents, and contributed mightily to nautical knowledge.

Maritime life began at the age of 43 for Vespucci –whose first name was to be adapted to name the continents of North and South America. He could be described as the quiet man of the age of cross-ocean exploration, even though he was an illustrious and fascinating personality of his day. Besides being a superb navigator, he stands out among contemporaries because he first was a Renaissance man, then a skilled sailor and a proficient astronomer, according to historian Margherita Calderoni. 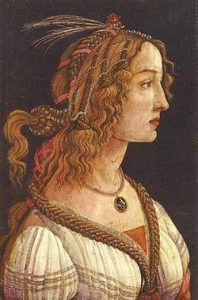 Simonetta Vespucci as a model for Sandro Botticelli

Leaving on a mission funded by the King of Portugal and which corrected the serious error of Christopher Columbus who thought he had found the new way to the Indies, Vespucci can lay claim among Europeans to having discovered the Americas.
Dr Calderoni described the considerable degree to which many people still under-rate Vespucci, when she delivered a short lecture to an audience of members of the Accademia Italiana Club who had been invited on board the sail training ship. As an Italian cultural institution based in London, the club was for three hours on August 6 the focus of what Dr Rosa Maria Letts, its director, said was a magical evening with a very Italian flavour.

Vespucci was born in 1484 in Florence, which was not even one of the Mediterranean superpowers (Amalfi, Pisa, Venice and Genoa) of his day. While Florence is not on the sea, the River Arno was the spiritual starting point for many ocean navigators.

“He was a man with remarkable talents, not hungrily ambitious, brave, honest, generous, loyal to himself and friends, ” said Ms Calderoni. He brought to the sea the curiosity of the Florentine humanists, the rational spirit of research, and scientific method.

Dr Calderoni, proconsul in the UK for the organisation Fiorentini nel Mondo, sought to dismiss claims that there had been antagonism between Vespucci and the more famous Christopher Columbus. “It is funny how history has put these two great men, one against the other.  That is a lie, ” she said.  “They knew each other, they esteemed each other; they were friends. 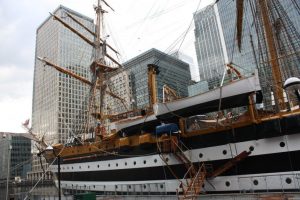 “Columbus was the romantic hero. Until his last day he was convinced he had landed on India and not on the new continent. To the contrary, Amerigo was more rational. He was the first to realise he had landed not in the Indies but on a new continent. His brilliant descriptions of it gained the attention of a group of German scholars and cartographers who decided to name the new land America in his honour, in the famous map by Martin Waldseemüller in 1507.This is the first map where you can see the name America.” 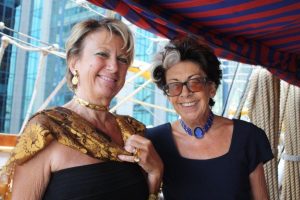 Dr Calderoni said that Vespucci spent his first 40 years in Florence building up advanced literary and scientific knowledge under the guidance of his uncle Giorgio Antonio, and breathing the cultural atmosphere around the Medici court.

Vespucci’s connections with the artistic geniuses of the day is worthy of more attention than it often receives today. Dr Calderoni said that Amerigo attended lessons of Paolo Dal Pozzo Toscanelli with Leonardo da Vinci, and that Ghirlandaio and Botticelli were close friends of the family. One of his cousins, the celebrated beauty Simonetta Vespucci who tragically died aged 23 of consumption, was a model for Botticelli as a delightful Primavera in his Three Graces, and in other masterpieces.

Vespucci was sent on missions on behalf of the powerful Medici, and in Seville, where the Florentine community was strong, he learned much about the exploits of Columbus and Cabot.

He sought the sponsorship of Ferdinand and Isabella, but they already had their admiral of the ocean in the shape of Columbus. Later Ferdinand appointed him to the key position of Piloto Mayor of Spain, in charge of instructing all Spanish maritime officers and overseeing the drawing of maritime maps. 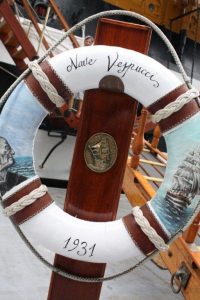 In all, Vespucci is credited with embarking on four great voyages. He sailed to the west, twice for Spain, twice for Portugal.

King Manuel of Portugal commissioned Vespucci to find out more about the lands identified by Columbus. He set out on an expedition nominally led by Captain Gonçalo Coelho. Under Portuguese flag, Vespucci participated in voyages between 1499 and 1502 to the then mysterious east coast of South America. On the first of these he was aboard the ship that discovered that South America extended much further south than previously known.

He was the first European to reach the shore of Brazil, in 1499, and the first on the coasts of Colombia, Uruguay and Argentina. He arrived in a place that reminded him of Venice, so he named it Venezuela (“little Venice”)’. He ‘discovered’ three of the world’s greatest rivers: the Amazon, the Parà and the Plate.

He explored more previously unknown coastline (over 6, 000 miles) than anyone else. He was the first to record the existence of the equatorial current and to map the Southern Cross; and the first to find a scientific method to measure longitude. He got as far as Patagonia, but stopped short by a few miles ahead of the strait discovered by Magellan 18 years later, turning back because of the immense cold and storms.  Vespucci died in Seville on Feb 22, 1512. 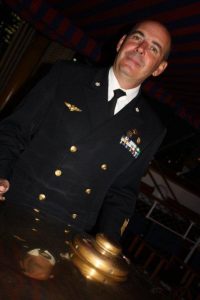 Back in the present, the commanding officer of the Amerigo Vespucci, Curzio Pacifici, and his crew (including currently 98 naval cadets of whom 18 are women) warmly welcomed guests on board, where hospitality included a splendid buffet in Italian style.

Capt Pacifici said that the three-mast ship (home port La Spezia) was built and outfitted in 1931 at Castellamare di Stabia near Naples together with a sister, the Cristoforo Colombo. The design, including port holes, was inspired by 74-cannon ships of the late 18th century. A life-size figurehead of Vespucci is a notable feature.

The ship has been refitted seven times, and in 2000 modifications were made to allow for female crew members.  Decks are of immaculately-kept teak, and there are 20 miles of ropes, all natural manila.

Of 4, 000 tons displacement, the ship is 101 metres length overall, with the main mast 54 metres high. There are 26 canvas sails.  Speed is 12 knots with sail, or 10 knots powered by disel electric engines. On some training voyages, as many as 280 cadets are taken on board. The cadets, who sleep in hammocks, perform the same tasks as their counterparts did in the 1930s – most of the operations are manual.

A passing US naval ship once saluted the Amerigo Vespucci as “the world’s most beautiful ship.” After World War II, theCristoforo Colombo was assigned to the USSR under reparations and after 10 years decommissioned. 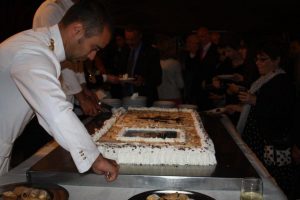 The Amerigo Vespucci left Leghorn on July 8, sailing to La Coruña, London, Hamburg, Antwerp, Lisbon and Malaga, heading back to Leghorn for September 21 2013.

The success of the Accademia Italiana event owed much to the support of the Italian naval attaché in London, Rear Admiral Dario Giacomin, who trained on the Amerigo Vespucci, a vessel that naturally remains close to his heart.