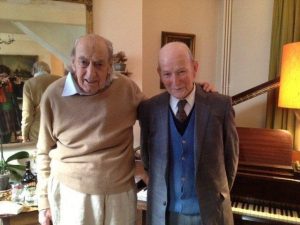 Indefatigable marine broker Antony Delderfield, who first set foot in the Lloyd’s market 72 years ago and became a stalwart of international broking on behalf of Greek and Far Eastern interests, has died at the age of 88. He was the oldest active broker in London, and possibly the world.

Leading figures in the London market and among his client base have been paying tribute to Mr Delderfield for his consummate professionalism , his devotion to those who served Lloyd’s, and his gentlemanly charm.

Always level-headed and practical, he combined shrewd analysis with an ever-sparkling sense of humour. He was a fund of insurance-linked ideas, even sounding out acquaintances on novel propositions while ailing in hospital in London in recent weeks. He was a marine consultant to Arthur J Gallagher (UK) at the time of his death.

Tony Delderfield loved the written word, and wrote four books including an autobiography in his 80th year.  He contributed many articles and letters to publications including Insurance Day, Lloyd’s List and www.allaboutshipping.co.uk

A headline in Lloyd’s List a few years ago summed up his career: “Old hand Delderfield offers experience with a fun premium.”

He seemed destined from birth to become involved with shipping and insurance: his grandfather was the bearded sailor featured on mass-selling packets of Players Navy Cut cigarettes. His step-father Richard Quiney was a director of Walsham Brothers and helped him in 1941 secure his first job related to Lloyd’s, with the small firm Cyril Wintle & Co. At the age of 15 he was too young to broke business but the fact that there were in the 1940s around 140 underwriters in the Room principally concerned with marine activity made a big impression.

Towards the close of 1941, he volunteered for the Royal Armoured Corps, going on to serve as a tank commander with the 4th/7th Royal Dragoon Guards for the Normandy landings in June 1944. During his service he was wounded twice (throughout his life he made several remarkable recoveries from various ailments) and was repatriated to the UK.

He was appointed to the military government in Germany, where he met his future wife Hella (who survives him), before being hired by broker P Wigham Richardson and rejoining the Lloyd’s market in 1947. Later, he was appointed head broker at the firm of Sir William Garthwaite Insurance, where he became managing director in 1957. While at Garthwaite he became a member of Lloyd’s in 1956, which at first brought him personal profits, but like many other names he was hit badly by the market crash at the end of the 1980s (“by 1990 I had lost every penny of profit from the preceding years”).

He spent many happy years working for Stewart Smith (later morphed into Stewart Wrightson), where he greatly admired George Stewart, the chairman, and deputy chairman and aviation specialist Charles Hughesdon, who succeeded G J Stewart as chairman. Both stand out as eminent figures in the post-war history of Lloyd’s.

While his flair for handling marine, oil and gas risks led to directorships he always relished working directly with his many clients and contacts. He knew personally or did business with most of the prominent and many of the lesser known shipowners in the Far East, and developed strong business relationships with Greek operators.

He had a reputation as being a maverick at times, and admitted that many of his very early risks were ‘lousy, ’ comprising “mostly over-age Greek ships, flying flags of convenience and carrying overloaded cargoes.” Later he won excellent contacts with reliable Greek shipowners: one of his friends was Rokos Vergottis of dry cargoship operator Adelphi Vergottis. Mr Vergottis was of all the owners “the most eccentric and fun person to do business with, ” wrote Mr Delderfield.

In the 1960s and 1970s much of his Hong Kong business came from Wheelock Marden, for which he placed risks at Lloyd’s and with Britannia P&I Club. Another client was Sir Y- K Pao, who headed the world’s biggest fleet at the time.

One of his best friends was Frank Novak, whom he met at Stewart Smith and who channelled millions of pounds worth of new business into Lloyd’s. Mr Novak, who died in 2009, was one of the “unsung heroes” of the broking sector, according to Mr Delderfield. The two brokers had a mutual friend in the actor Herbert Lom, who died at the age of 95 in 2012. Mr Lom was tempted in the 1970s to invest his substantial earnings in Lloyd’s but Mr Delderfield warned him to stay clear of certain entities – saving the Czech-born film star from a potential huge financial loss. Mr Delderfield related the story in detail recently for www.allaboutshipping.co.uk

Despite the market’s problems, Mr Delderfield stayed faithful to Lloyd’s.

“Lloyd’s was, and still is, the most innovative market in the world, ” he wrote in a serious comment, in his book Humour at Lloyd’s. “Policies taken for granted today were thought up by a handful of bright underwriters sitting in that old [1928] building.”

Ever plain-spoken, in a speech in 1969 he referred to “the disastrous marine figures that have been seen at the last closed years, ” which he said were “primarily the fault of the underwriters themselves, ” adding that as far back as 1949, brokers had fought among themselves to get business at ever cheaper rates.  “The underwriters were weak, and allowed us to get away with it.” Underwriters in 1969 attempted too sharply to enforce a leap in premium, something that Mr Delderfield said was viewed by shipowners as “demanding money with menaces.”

He claimed that one of the reasons he went on working beyond normal retirement age was that he lost so much money at Lloyd’s, but friends could not imagine him ever sitting still. That was confirmed when at the age of 84, he made soundings to launch a venture to be called the League of Gentlemen Insurance Consultants, which had the neat acronym of Logic. Many elderly people he knew had told him over lunches at his beloved Lloyd’s Club that they were bored after surrendering their underwriting pens and brokers’ slipcases and were looking for a way of putting their expertise to use again. The venture failed to get off the ground, but the veteran broker continued to devise ingenious insurance-linked projects.

Partly because of his wartime experience, he was a great admirer of the armed and special forces, which inspired his thriller published in 2010,  Footprints and Shadows, “dedicated to the brave men and women who were sent into occupied France in the 1940s.” He was outraged by the ease with which Somali pirates were able to attack merchant shipping in the last few years.

Just before his 80th birthday, he had published his memoirs, under the title Fate – the Ultimate Sculptor. In 2007 he narrated in Humour at Lloyd’s an often hilarious compendium of crazy incidents in the insurance market.

Away from work, he maintained his nautical enthusiasms by running a 45 ft ketch,  Antonella, named after him and his wife. The boat was based at the marina at his favourite holiday haunt, St Tropez.  Sailing inspired The Skipper’s Handbook, published in 2005.

He became in 2002 a director of Valles Steamship Co of Hong Kong, whose fleet he placed with Lloyd’s underwriters for half a century. David Koo, managing director of the shipping company, said: “Tony’s association with Valles dates back from my late father’s time, well before I had the pleasure of being introduced to him in 1960.
“His guidance and invaluable expert knowledge in ship insurance matters served us well for over 60 years. This sort of association is a rare thing in modern times and demonstrates his value to us not only as a shipping man but also as an individual whose wit, intelligence, humour and loyalty greatly endeared him to us all.  Tony was a long serving director of the board of Valles Steamship Company Ltd Hong Kong, right up to his untimely demise.
“Tony was a close Koo family friend and his fatherly figure will be dearly missed by me and all of us at the Valles group of companies.”

Jonathan Suckling, managing director, specialty risks, at Arthur J. Gallagher (UK) Ltd said: “Gallagher were very fortunate to have benefited from Tony’s consultancy and immense experience for the last decade of his working life. Tony brought with him unprecedented knowledge and charm, as well as introductions to some of the most prestigious shipowners in the modern world.

“And his stories of the past were the stuff of legend. He once told us how, as a young broker breaking into the Greek market, he visited Aristotle Onassis annually, often aboard his yacht Christina. After many years of offering the very best of insurance advice on markets and pricing, Mr Antony, as Onassis called him, eventually felt able to press the owner for a firm order. The considered reply left Tony unusually stuck for words: ‘Ah, but Mr Antony, if I gave you my business would you keep giving me such good advice?’

“We will miss our friend Tony and the market will be just slightly less glamorous for his passing.”

Simon Beale, chief underwriting officer at Amlin, said: “It was with great sadness I heard of Tony’s passing; he has been a good friend over many years. It was as producing broker of a number of key Hong Kong fleets that I first met Tony – to this day I can remember much of the lunchtime conversation as Tony had a captivating dialogue and engaging sense of humour. This he retained to the last and I never ceased to enjoy his company. Only a few weeks ago he was discussing a ‘great’ insurance business opportunity with me – as an underwriter I saw some flaws but I enjoyed how he sought to broke it.

“Tony was a great supporter of the younger generations – foremost he enjoyed their company, but he also got much satisfaction from seeing their careers and lives in general develop. Tony had a wealth of experience, from his early days of broking through his intrepid war service and on to being one of the most prodigious marine brokers in Lloyd’s.

“He was therefore a font of knowledge particularly with regard to Lloyd’s and the machinations of the marine insurance sector, but also the many other areas of interest – jazz, sailing, writing, St Tropez and his family – he never failed to have a view, usually forthright and always entertaining supported by an experience or two which got delightfully more embellished with the years.”

Tony and Hella were married for 67 years. He is survived by family including his daughters Irena and Mishi; grandchildren Sacha, Romy and Gail; and great-grandchildren Ethan, Niamh, Coco and Paloma.

A Humanist funeral service for Antony DesCamp Delderfield  (1925-2013) has been arranged for Friday  August 23 2013 at 15.45 at West London Crematorium, Harrow Road, Kensal Green. Donations to the Royal Brompton Hospital, Elizabeth or Victoria Wards (www.rbhcharity.org) have been requested, rather than flowers.

[…] An obituary of Antony Delderfield was published on this site in August, at https://allaboutshipping.co.uk/2013/08/22/tributes-flow-for-veteran-marine-insurance-broker-anton… […]