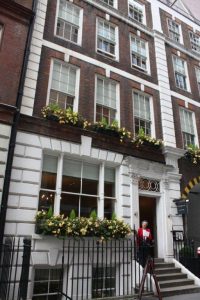 Insurance market practitioners and other friends gathered at The Lloyds Club in the City for a celebration of the life of Antony Delderfield, the veteran London marine broker who died in August aged 88.

In a tribute to his former colleague, Matthew Pike, chief operating officer of Gallagher International in London, said that Mr Delderfield had a long and distinguished career in the Lloyd’s market. It had been Tony’s wish and that of his wife Hella that his friends in the market should get together to remember him.

Mr Pike had spoken to the family to tell them about the reunion, “and I think this means a lot to them.” He added that Mr Delderfield would have wanted the occasion to be used to promote his autobiography,  Fate the Ultimate Sculptor, proceeds from the sale of which go to the Royal National Lifeboat Institution. 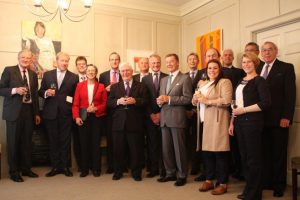 Mr Delderfield entered the insurance business 72 years ago, working for a series of key broking companies, and placed business for many maritime and energy clients, including prominent shipowners in Greece and the Far East. 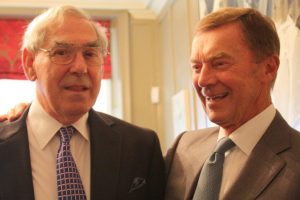 At the time of his passing, he was a marine consultant to Arthur J Gallagher (UK).

Mr Delderfield was a long-standing member of The Lloyds Club, which has occupied various premises before moving in 2009 to its current home, a Georgian listed building in Crutched Friars. In keeping with Mr Delderfield’s effervescent character and sense of fun, the gathering was enlivened by the relating of many anecdotes around the man who among other works wrote a book entitledHumour at Lloyd’s and a wartime thriller Footprints and Shadows. 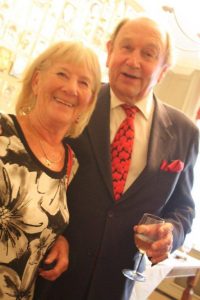 Sheila Hemphill and Nigel Kemble-Clarkson, the longest serving full time broker at Lloyd’s, who is author of Reflections of a Rascal.

An obituary of Antony Delderfield was published on this site in August, at