Naming Ceremony for Ever Living 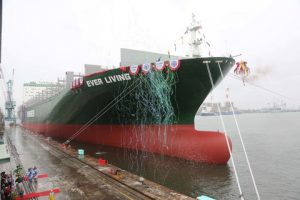 August 28, 2013 -Evergreen Group today held the naming ceremony for its first L-type vessel built by CSBC Corporation in Taiwan, the Ever Living. The ceremony held at CSBC’s Kaohsiung shipyard was officiated by Mr. S.S. Lin, First Vice Group Chairman of Evergreen Group. The official rope-cutting of the new 8, 508-TEU vessel was performed by Dr. Jih-Chu Lee, Chairperson of Taiwan Financial Holdings and Bank of Taiwan. The ceremony was attended by dignitaries from Taiwan and abroad.

In his speech,  Mr. S.S. Lin said, “The ten L-type vessels are the biggest and most advanced among our owned fleet.  Over the next two years, their deliveries will substantially enhance the competitiveness of our operating fleet in the global shipping market.”

Evergreen Group signed a contract with CSBC to build ten L-type vessels in May 2011; the biggest order received by CSBC to date.  To celebrate the naming CSBC arranged a performance of Chinese lion dance and invited the Evergreen Brass Band, part of the Evergreen Symphony Orchestra (ESO), to perform live. The stirring music enhanced the ceremonial atmosphere of the event tremendously.

CSBC committed significant resources to the building of the Ever Living, spendingnine months in optimizing the hull design.  The results of testing by the Hamburg Ship Model Basin (HSVA) revealed a speed 0.7 knot faster than the average value experienced by the Institute and a 0.45 knot higher speed compared to the expected performance of the optimized design.  Given the same engine specification and operated at an identical speed, the hull design can achieve reduced fuel consumption of more than 10%.

For the main hull structure, CSBC adopted high tensile steel (HT47), which was jointly developed by the shipbuilder and China Steel Corporation in Taiwan.  The special metal enables the ship to achieve the same structural strength with less material.  With lighter weight, the vessel requires less propulsion, saves energy and produces lower carbon emission.  In July the sea trials of Ever Living revealed excellent performances, confirming that CSBC’s quality and technologies can keep pace with other leading shipbuilding companies.

Ever Living is 334.8 meters in length, 45.8 meters wide, with 948 reefer plugs and a draft of 14.2 meters.  The vessel can cruise at a speed up to 24.5 knots.  The ship, owned by Evergreen Marine (Singapore) Pte Ltd, will join Evergreen Line’s Far East – Europe route after her delivery on August 30.

Evergreen vessels, the Ever Vital and Ever Vigor were the first two containerships built by CSBC and ordered by Evergreen back in 1977 and now, Ever Living is the biggest containership built by CSBC. The construction of the L-type vessel not only indicates an important milestone for the local shipbuilding industry but also highlights the enhanced competitiveness achieved by the cooperation among Taiwan’s shipbuilding, steelmaking and marine transportation sectors.

Launching of the ship Ocean Osprey at Zamakona Yards Pasajes

DNV assists the development of LNG as fuel in Germany