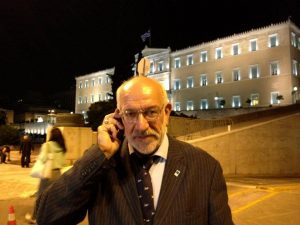 John Faraclas outside the Greek Parliament: Watch this space…

Once again the John Faraclas live interview to Lilian Margaritis took place at the SBC TV studios last Thursday the 29th  of August 2013, and was primarily focused on the markets, war, maritime tourism, the  Greek coastal services and politics.

The BDI closed  at 1.136 points, down 10 points from the previous day and 29  points from  the 23rd of August “ thanks” to the capers- which were on a downward trend this time, re-confirming once again Faraclas’ prediction of a weak, uncertain and volatile market. With the BCI at 2, 158 points, down 28 from yesterday 28 August, one can understand the coming situation. All other other fronts, BPI, BSI and BHSI where on a plus/minus 1-3 points assisting the market’s stagnation and downturn.  Mrs. Margaritis agreed and also reconfirmed Faraclas’ predictions insisting what the best remedy could be. Faraclas said that it is the banks to blame for as the banks must – here and now – stop financing extra tonnage despite the low contracting newbuilding, resales and second hand vessels of all categories. He predicted that the banks will fall in their own graveyard at the end of the day if they don’t stop financing vessels.

Issues such as the VLGC, the Chinese expansion with the construction of  new  refineries, their forthcoming  joint ventures for bulkers and other issues was also discussed. Zim’s losses of US$72 mio in the second quarter was also analysed – a very important issue.

The Middle Eastern saga with the Syrian inferno ante portas being the number one issue was mentioned as an area to be closely watched, as things can turn sour for many in the region – an are 3, 000 x 3, 000 square miles…

The forthcoming 8th Road Show in London by the Athens Exchange at Bloomburg’s premises in early September was also mentioned as an event not to be missed.

The Greek Coastal services and the Santorini issue was also analysed and the interview ended with Faraclas asking the Greek prime Minister to leave parliament with all 300 MPS and allow the appropriate Greeks to form a government and properly run the country having as a prototype the successful shipping industry, the only industry that Greeks and Greece thrive – no matter the crisis.

The above and other issues can be seen in the video herebelow and soon with English subtitles.

Enjoy the rest of the summer break and do please comment!

HSH Nordbank posts earnings uptrend in the first half