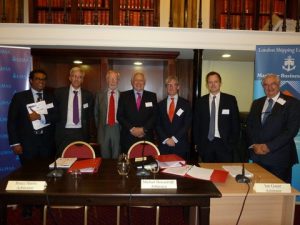 “Another sad case in which the charterers of a vessel have found that market conditions are making it impossible for them to continue to perform” provided the scenario for an arbitration workshop, organised jointly by the London Maritime Arbitrators Association and the London Shipping Law Centre on Monday, September 9th.

Nearly 90 lawyers and other shipping professionals crammed into Quadrant Chambers in Fleet Street to hear shipowners allege that charterers had renounced an NYPE time charter.

For the owners, counsel Sean O’Sullivan said the charterers’ representative had alerted his regular owners’ contact to financial difficulties which cast doubts on their capacity to meet hire payments as per contract. “As usual, the charterers made efforts to negotiate a reduction in rates which might enable the charterparty to continue. When those came to nothing, they were forced to come clean and accept that they would not be able to pay the hire.”

Mr. O’Sullivan contended that the owners had reacted sensibly, accepting what they felt was a renunciation and immediately took steps “to mitigate their loss, rather than waiting for things to go from bad to worse in a difficult market.”

However, the charterers felt the owners had “jumped the gun.” Representing the former, counsel Julian Kenny said the hearing would focus on a telephone conversation between the owners’ and charterers’ representatives as to whether financial  difficulties admitted by the latter amounted to stating that they had renounced the charter. However, his clients had never expressed an unwillingness to pay nor that they would have been unable in fact to make the next payment of hire on its due date.

Witnesses for each side, role played by Sanjay Patel and John Tsatsas, gave their versions of the critical conversations and discussions, were cross examined by counsel and questioned by arbitrators Michael Howard QC, Bruce Harris and Ian Gaunt. The panel found in favour of the owners and upheld their claim that the charterers’ effective admission of their “present and continuing inability” to pay, as per the contractual terms, amounted to a renunciation of that contract.

Ian Gaunt, Hon. Secretary of the LMAA, was pleased with “an exceptional turnout with a substantial number of overseas-based lawyers and maritime professionals in London for International Shipping Week.

“We were keen to participate in London International Shipping Week, bearing in mind that that LMAA arbitration is a significant contributor to the services offered by the London maritime services cluster. We used a succinct but realistic scenario to shed light on the conduct of an arbitration hearing, access to which would normally be limited to the parties and their representatives. We hope we have been able to provide an interesting insight into the work of maritime arbitrators and lawyers involved in the arbitration process in London, which continues to be the world leader in the resolution of maritime disputes.”

The latest issue of Lloyd’s Register’s technical publication for the marine sector is available now.

Institute of Export sets new Customs Diploma into gear, driven by demand from Nissan UK and other businesses,