The Military in British India 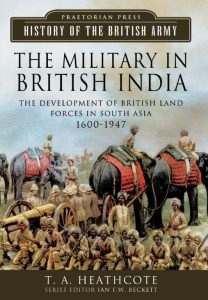 The book is part of the series edited by Professor Ian F W Beckett, who is one of the top 10 military historians in the UK.

It is, in essence, a history of constitutions more than campaigns, telling the story of how the forces of first the East India Company and then the Crown in India were organised, and how this organisation changed over the years in response to changing political imperatives both in the UK and in the Indian subcontinent.

After describing India’s military heritage, and a society that produced generals and soldiers who proved worthy opponents even for Alexander the Great and the future Duke of Wellington, the book outlines the wars by which, mostly with Indian manpower, the British built their Indian Empire as the successors of the Mughal rulers. It shows how this process was affected by internal disputes among the British themselves; between the East India Company and the British Government in London; between the company’s senior civil servants and military officers in India, between officers of the company’s three local armies and those of the British Army, and between the company and its own soldiers, European and Indian, culminating in the Indian Mutiny or Revolt of 1857. 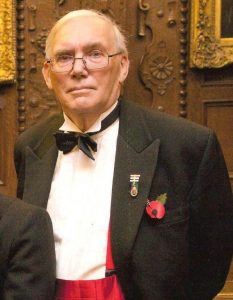 The second half of the book describes the subsequent controversies over the re-organisation, composition, recruitment and political control of India’s armies under the British Crown, from their reduction to an imperial gendarmerie, designed to act primarily as auxiliaries to an enlarged British Army contingent, to its gradual re-emergence during two World Wars as a modern fighting force. It pays particular attention to the problems of recruiting and training the officer corps, with the admission of Indian cadets, partly in response to a growing Indian Independence movement, a critical issue.

This book contributes to a greater understanding not only of the formative effect on the British Army of its Indian experience, but also of the present-day Indian Army, which, with a million men under arms, is one of the largest in the world. 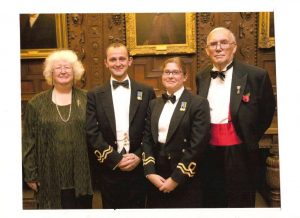 Dr Heathcote with his wife Mary, attending a dinner at Middle Temple Hall, October 2010, where they were guests of their daughter and son-in-law.

Dr Tony Heathcote began a Ministry Of Defence civil service career in 1963, in charge of the National Army Museum’s Indian Army galleries. In 1970 he became curator of the Royal Military Academy Sandhurst Collection until his retirement in 1997. Dr Heathcote was educated at the University of London’s School of Oriental Studies, where he wrote his PhD thesis on British policy towards Baluchistan. He served for many years as an officer in the Territorial Army, mostly in the Royal Artillery, and subsequently in the Royal Auxiliary Air Force.  He is a Fellow of the Royal Historical Society and a member of the British Commission for Military History.